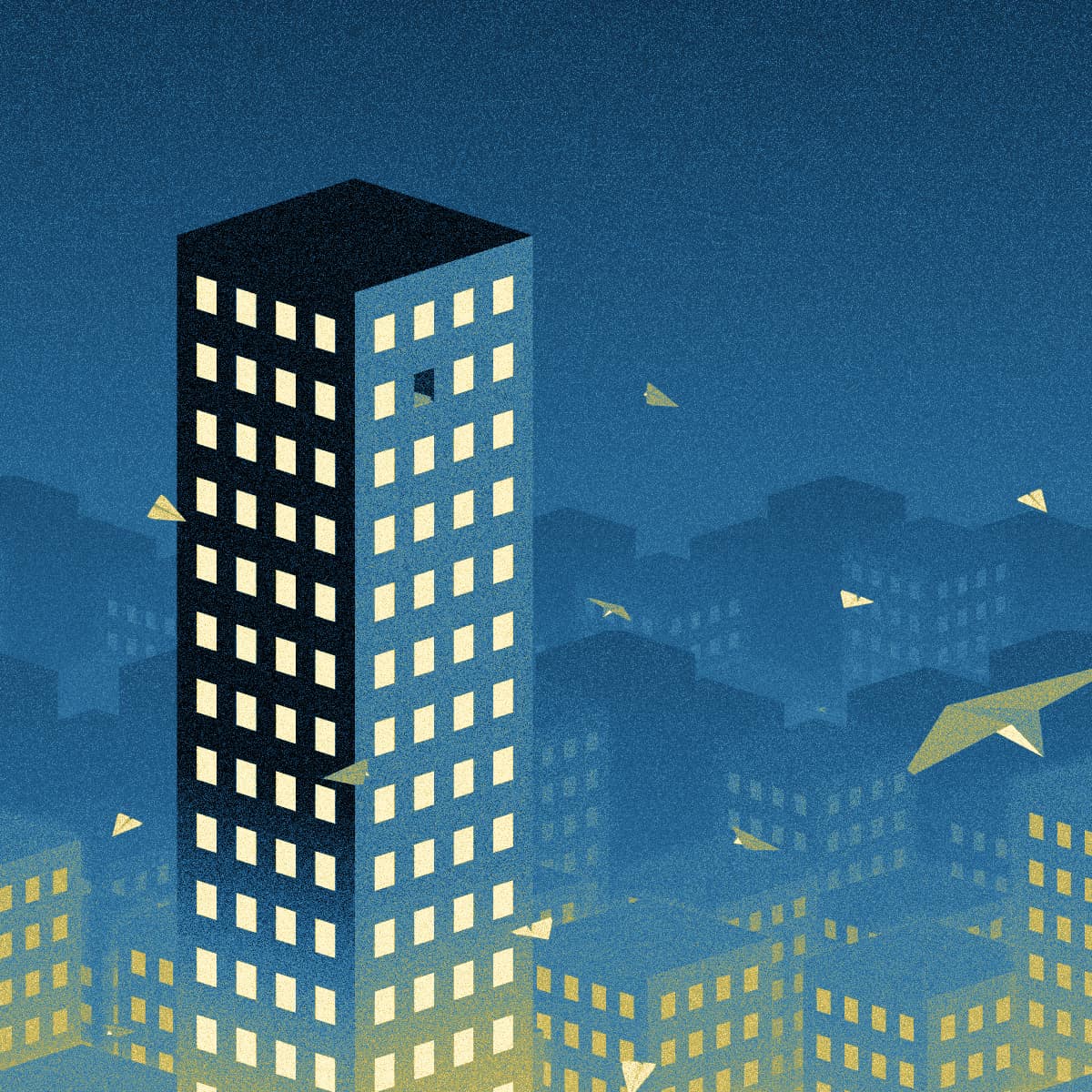 ‘Big City Lights’ is a series where I (try to) make an illustration every day to a set of rules. The rules are: a fixed set of angles to work with, a fixed set of colors and limited number of light sources in the scene.

It just kind of happened. I made a series of three similar illustrations about a building towering above a city landscape. It got me thinking about some old movies I saw as a child; ‘Metropolis’, ‘Triumph des Willens’ and ‘Blade Runner’ to name a few. And also a documentary about the ‘ghost cities’ in China, where a few hundred people live in a brand new city build for thousands. Those cities are not not build for people it seems, the cities just tolerate the people being there.

I’ve been working in Adobe Flash since 1998 to create all my illustrations and animations. To this day I find it the most intuitive editor to create vector graphics. In this series I start off each illustration with just three lines, angled in 0, 73 and 287 degrees. It’s not a classic isometric perspective, it’s slightly more slanted. To be honest, this perspective was not part of a well thought out plan, it just was what I came up with in the first couple of illustrations. It seemed to work well, so I stuck with it. Most of the time I just ‘sketch’ the scene using just lines, making sure it all ‘makes sense’. I try to make ‘building blocks’, like Lego, and piece the scene together. After that, I fill in the blocks with color, using separate layers for fills, lights and shadows. It’s much like making a theater decor, placing parts in front of each other, trying to create the illusion of a third dimension. In finalizing the illustration, I use half transparent gradients to add atmospheric perspective and frame the scene in a square. Finally, I use Photoshop to add color using ‘Gradient Map’ and ‘Add Noise’ – smart filter.

At first I posted a few of the illustrations on my Facebook page, and friends gave me a ‘like’ here and there. After a while I tried to post one every day and it became clear the illustrations were part of a series. People appreciated the idea that it was a series. Maybe a series is what makes every illustration easier to relate to (?). After I made about ten, I posted the first series on Behance.net. After the third series someone at Behance took notice I placed it on the ‘discover’-page. That was a big surprise, I was used to a few likes here and there, and now there were hundreds every day. So yeah, that is where we are now. I don’t know how long I will continue ‘Big City Lights’, as long as I have the inspiration to create one everyday, I will.

I’m a webdeveloper/designer/illustrator from Arnhem, The Netherlands. I’ve started my company ‘Grootlicht’ as a webdeveloper in january 2000. Since then I worked for a bunch of online marketing bureaus and individual companies in the Netherland and Europe. In the last couple of years my focus is more on illustration and animation.
Website
CategoriesIllustration
Tagsarchitecture, city, flash, ghosttown, illustration, light, people, photoshop, shadows