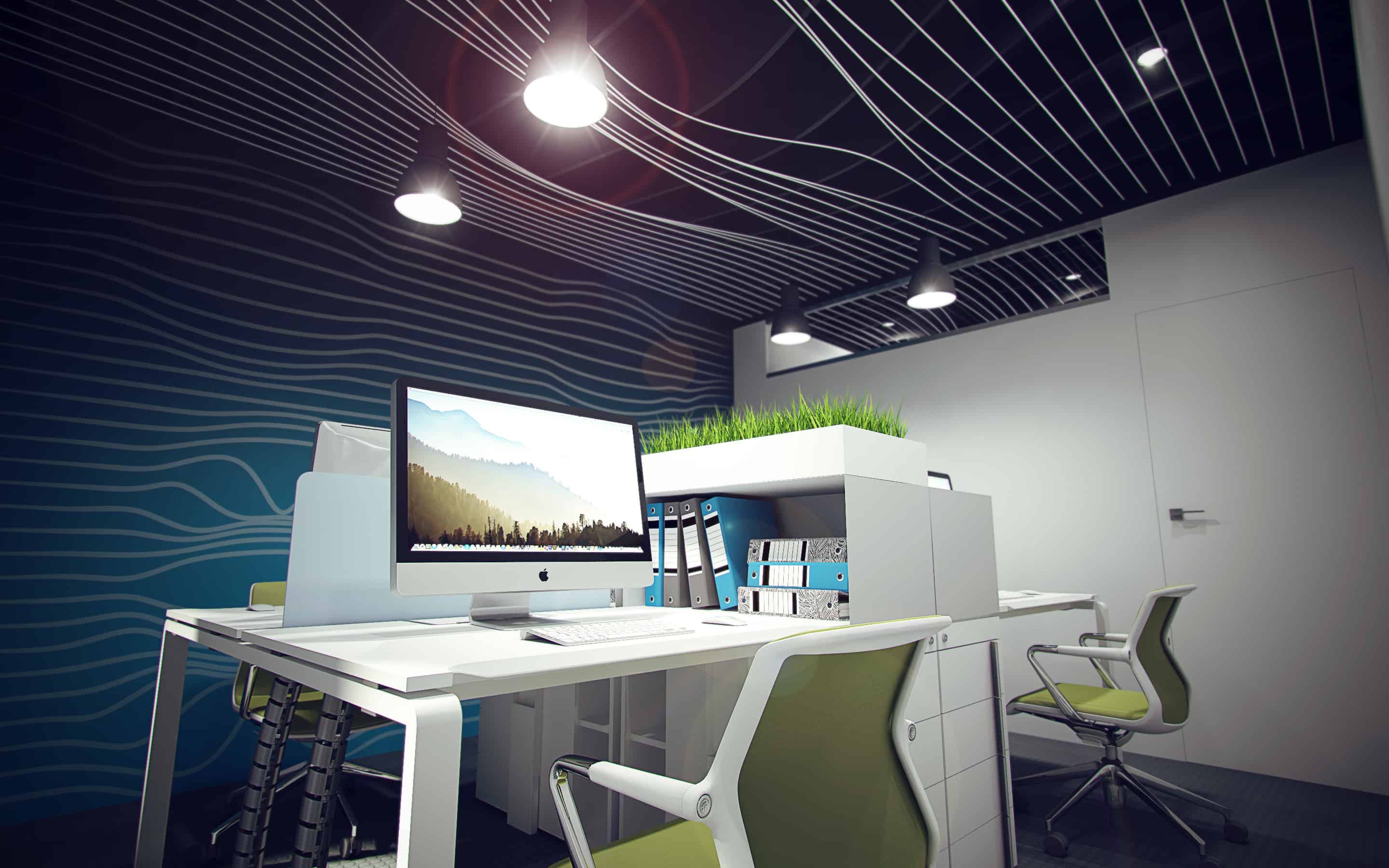 Office interior design in Kyiv using the methods of algorithmic morphogenesis was developed on the base of context-sensitive or adaptive systems. Office interior located in semi-basement part may be recognized by a winter garden, while ceiling architectural idea becomes uniting having level decreased and suspension lamps in places, where employees are concentrated.

GENERAL CONCEPT
In this project the team had to work with a semi-basement room in an old building with multiple challenges and constrains. The main goal was to create a space that is comfortable for work, losing the feeling of basement room and organizing convenient relax zones. In order to increase the labor comfort a ventilation system that spread almost under all ceilings was created. Due to narrow space we made a decision not to cover air pipes with dead constructions but to let them pass optimal ways and be a part of multilevel spatial ceiling geometry. Color design as well as ribs and cables system descending and interacting with the obstacles and context where needed allowed to make pipes almost invisible and created a distinct visual identity. Ceiling painted in dark color became an extraordinary solution that helped to make it kind of weightless.

ALGORITHMIC / PARAMETRIC METHODS OF MORPHOGENESIS
Spatial and planar patterns that made the office more solid were developed on the base of context-sensitive or adaptive systems. In this particular case the arrangement of key functional areas and main light sources were taken as a context. The initiall rigid grid deformed avoiding attractor-points.
No wonder the interference into cables metric series happens in places of dipping into workflow / over workplaces / here the process is similar to the streamlined body immersion into a tranquil liquid. Ropes serve isolines, emphasizing the elongated plan shape of the entire office, where one room flows seamlessly into another, while edges located athwart and painted same color as the ceiling help to create a three-dimensional geometry, serving barely noticeable frame.

Dmytro Aranchii is a Ukrainian architect graduated NTUU KPI (Kyiv, Ukraine, MSc in computer science), KNUCA (Kyiv, Ukraine, MArch with honor) and AA DRL (London, UK). He is the founder and the executive architect of young award-winning studio Dmytro Aranchii Architects focused on architecture, interior and product design. Studio extensively uses computational methods within design process. Thus, through the prism of analytical and algorithmic thinking, Dmytro Aranchii architects projects involve not only usual sensual or artistic design approaches but logical and functional parameters. The most important projects of Dmytro and his studio are: noMad: behavioral assembly system, Ukraine Expo 2015 Pavilion and implemented interiors such as Octopus Tentacles and Rules of Growth 2.0: L-Systems.  You can find more of his artworks on his Behance profile or website.
CategoriesIndustrial Design
Tagscontemporary, interior, kyiv, office, parametric, reception, ukraine, workplace