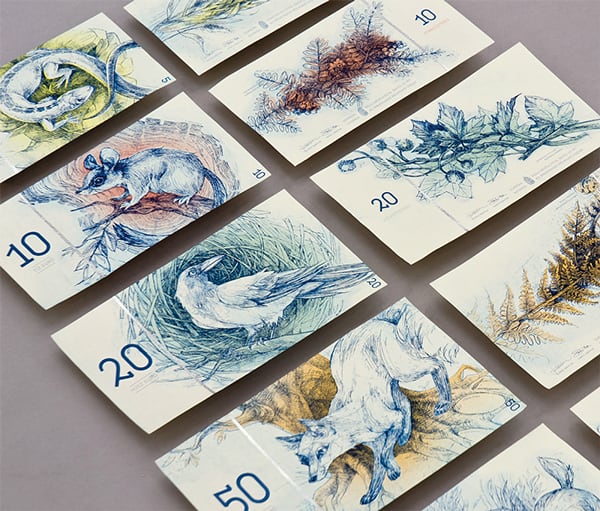 Hungarian euro banknote series. The common side of each note features european animals, the other side shows related species of plants. The banknotes are original etching prints.

My MA degree project is a banknote series for which I came up with a fictional currency, the Hungarian euro. The common side of each note features european animals, the other side shows related species of plants.
I used the original proportions of the existing euro banknote for my design, as the denomination increases, the size of each banknote is growing. The animals also represent the growth of value.

I designed and prepared five denomations of ten etchings, all etched in separate copperplates. This subtle and refined form of reproduction enabled me to imitate the original technique used during the production of banknotes, intaglio printing. My goal was to create a complete series with clear design, that transcends the tradition of banknote making. 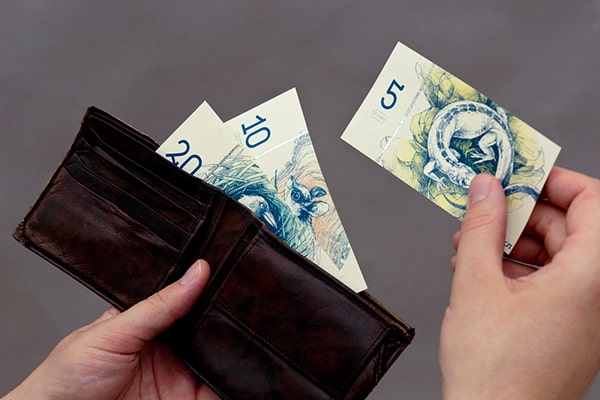 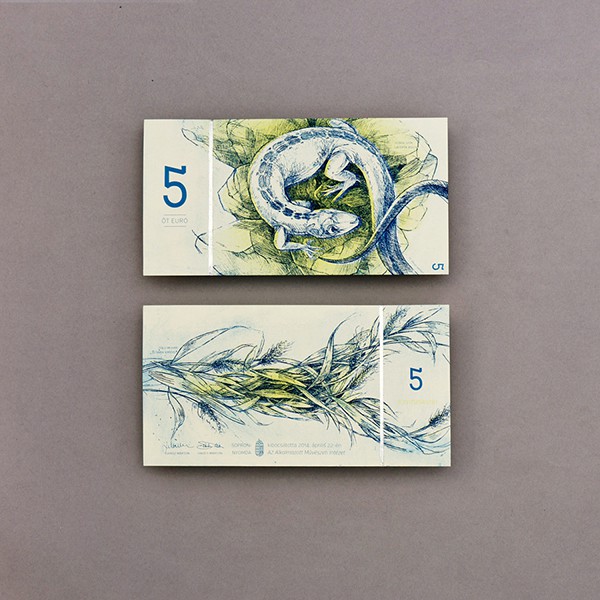 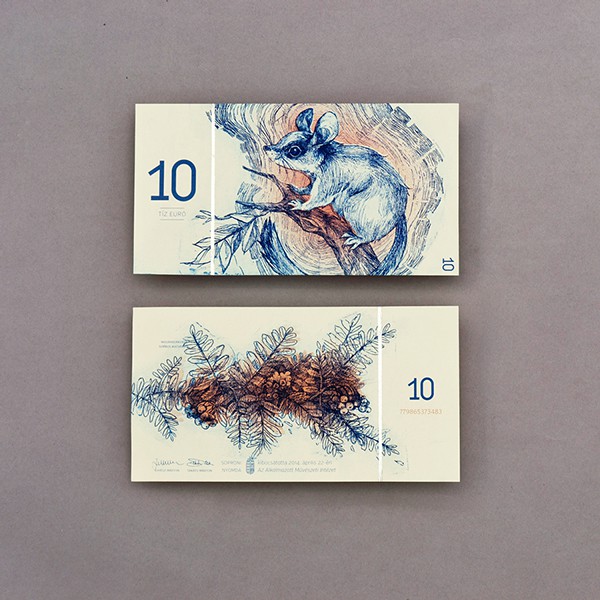 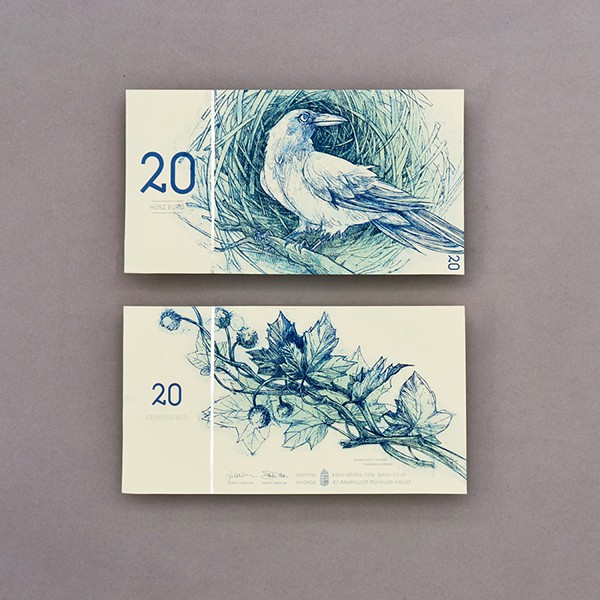 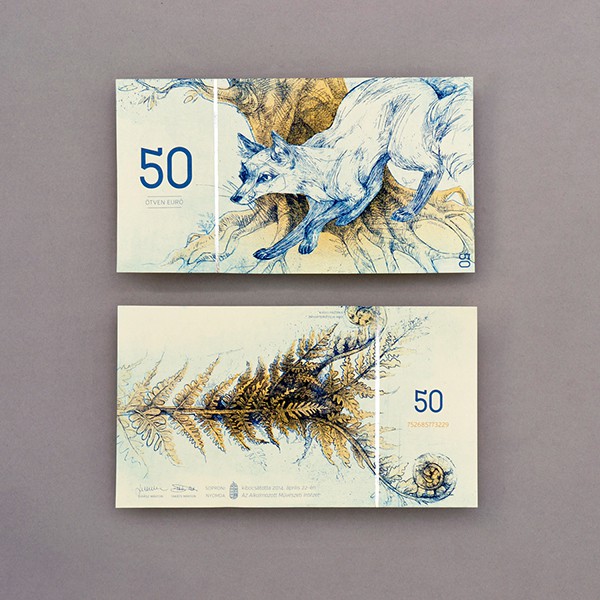 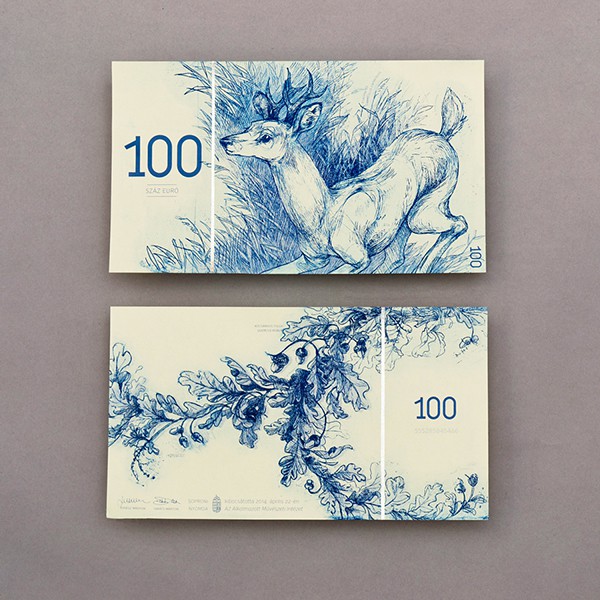 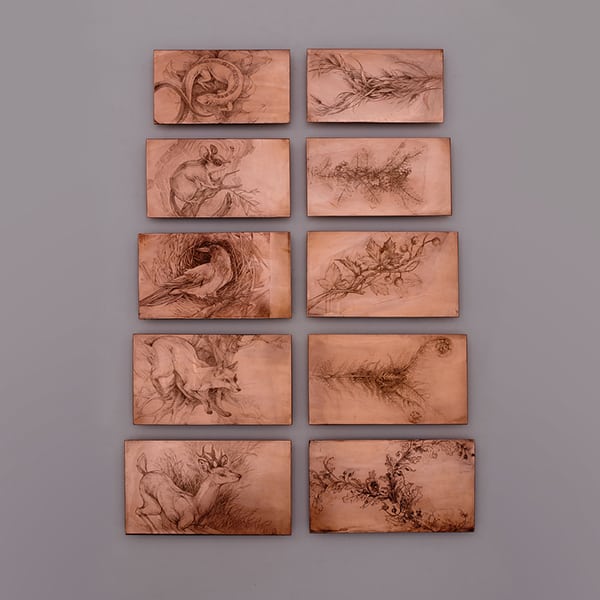 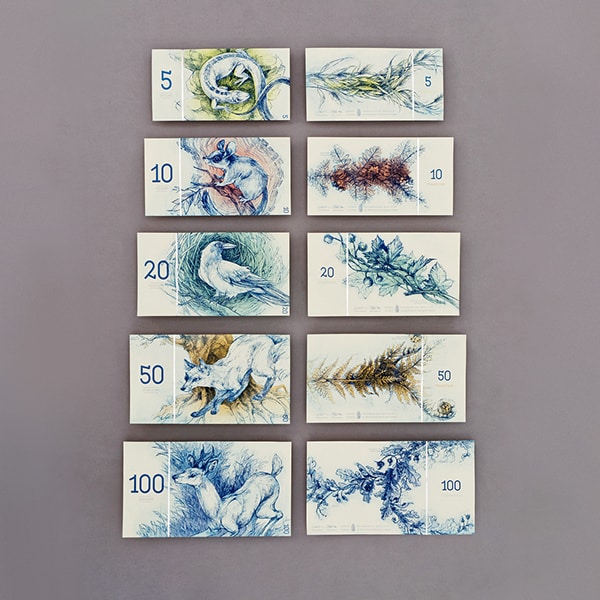 I only wanted to keep the essential visual elements of a banknote. The most important parts beside the graphics are the denomination, the serial number, the issuing authority and the authorized signatories. I left the the unnecessary security graphic elements behind, to get a clear visual impact.

I wanted to emphasise the animals and plants, the typography and the security marks are secondary on my notes. I started with thumbnails, they evolved to more detailed sketches, which lead to my final layout. 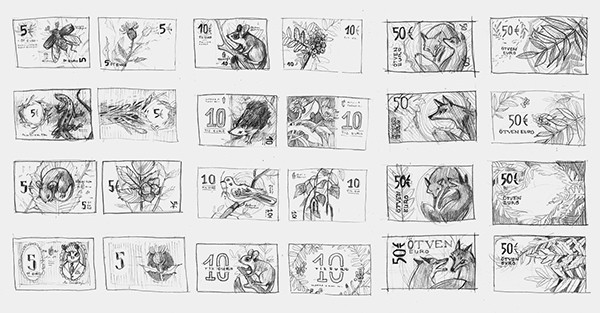 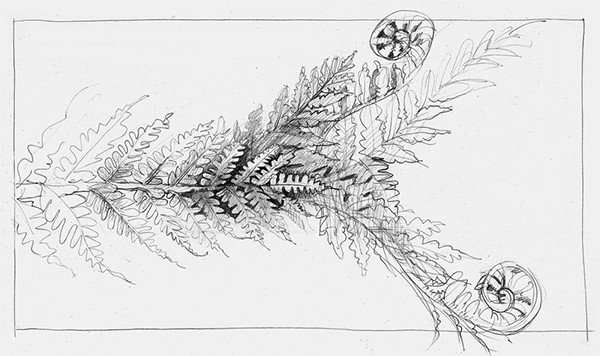 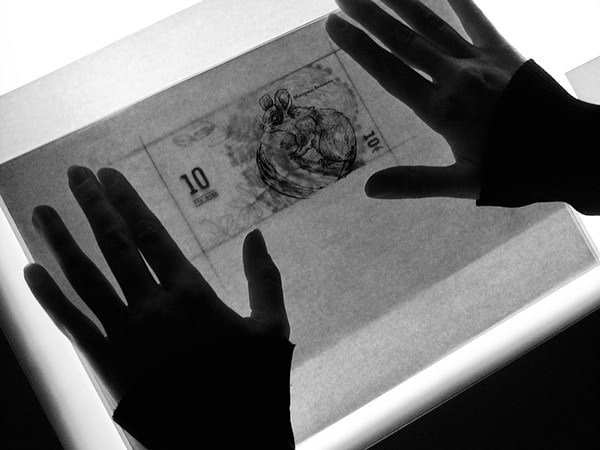 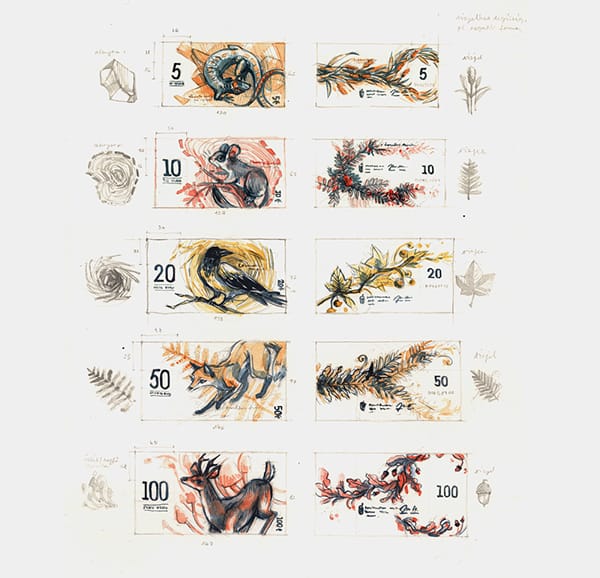 I made 1,5 scale graphite drawings of each species, which were the outlines for the final the etchings. The etchings are directly printed on digital print basis. All of them are inked and hand-pulled by me. 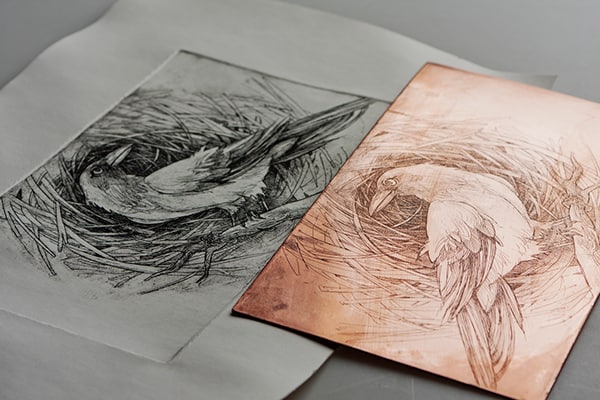 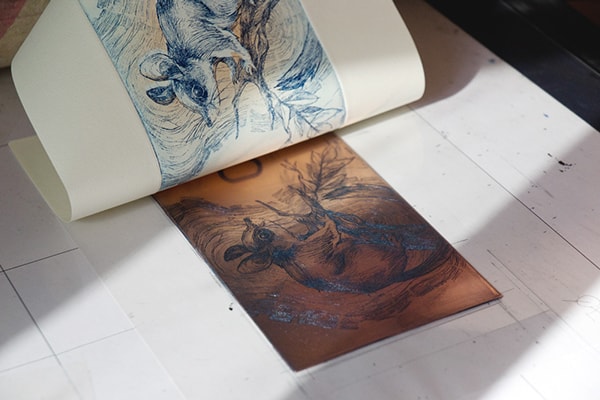 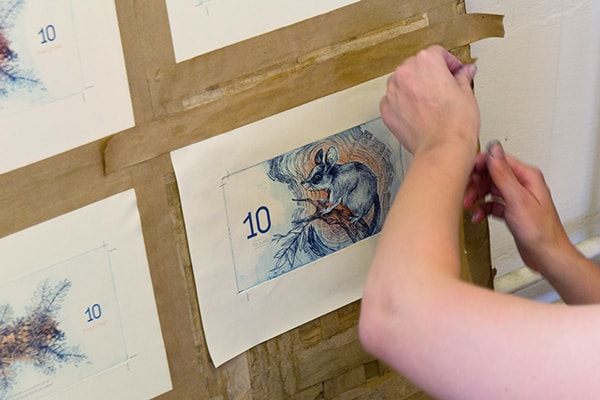 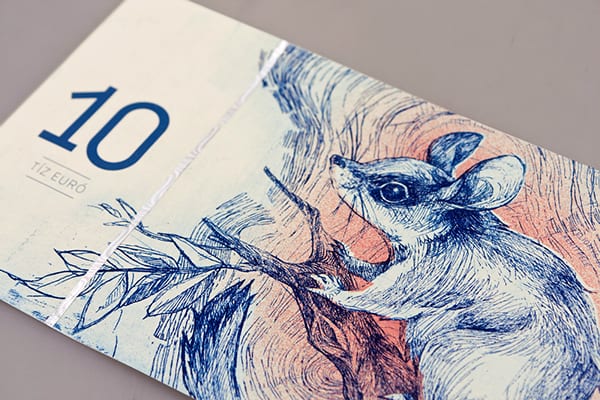 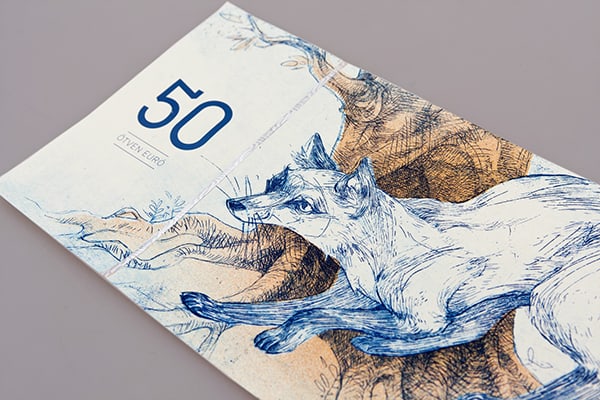 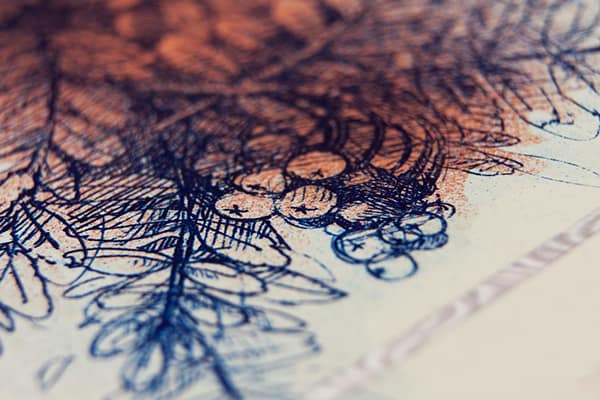 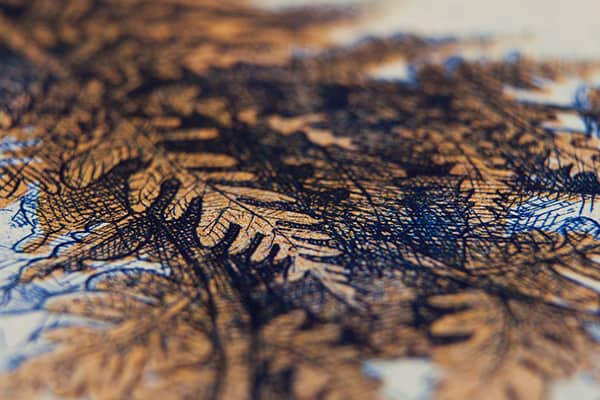 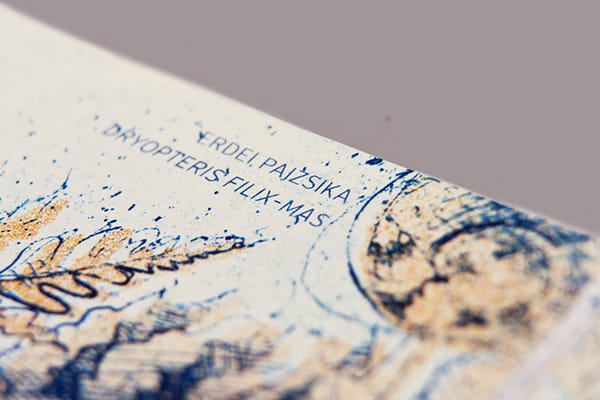 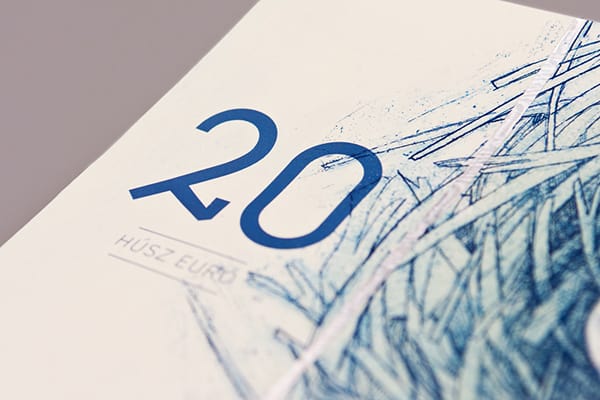 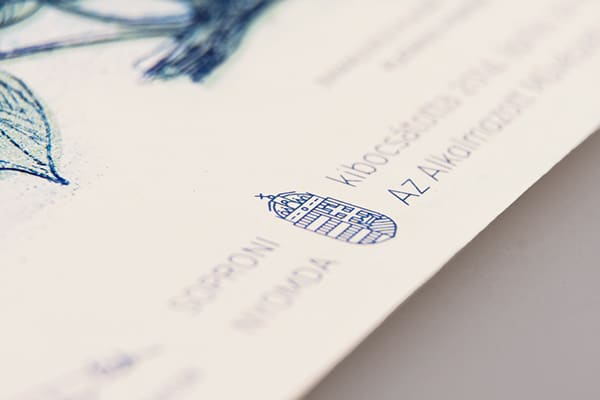 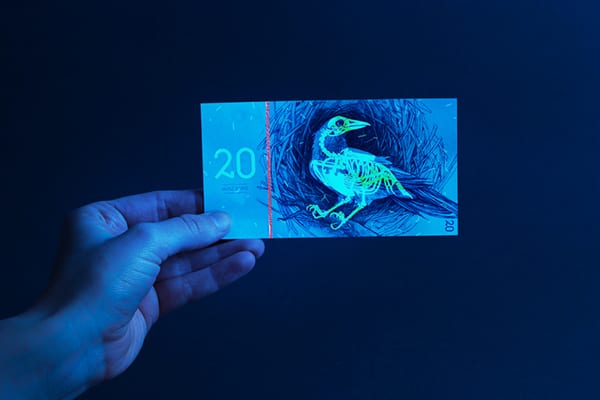 More about the Artist

Barbara is a Hungarian graphic designer, graduate student on Graphic Design MA course in University of West Hungary. She is experienced on different fields of graphic design. She likes the known traditional techniques like drawing, painting, and etching, but she likes to experiment with new and unknown ones to achieve the desired result.
She loves nature, all the small and big inhabitants, especially rodents. Her imagination does not stop at the edge of mind, fantasy creatures often appear in her art. The works of Barbara are clean and playful, they convey the diverse wonders of life. You can follow her on Behance or visit her Tumblr to find out more about her.