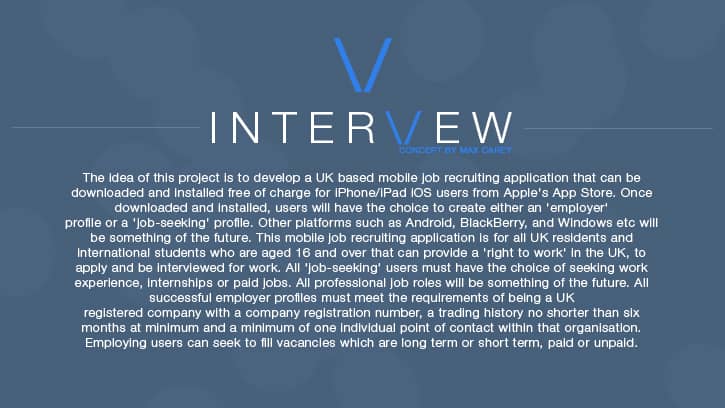 Intervew by Max Carey is an app that could help job seekers and employers. The app aims to guarantee an interview on one end and filtering out serious candidates on the other. The edge of my design over other competitor applications is that the design has a professional feel, yet, it is still refreshing to use. A lot of business inspired apps at the moment have a very bland and plain design which I think is the complete opposite of what is required to make it even nearly successful.
-Max Carey


This project – Intervew, was a project which I was asked to design by my good friend Jamie Dunn, an entrepreneur from the UK. During the time I spent on the project, I learned how to engage with the client in a different way than before, running through contracts and discussing opinions on every screen that I created. The application was built with the end goal being to guarantee an interview on one end and filtering out serious candidates on the other. This App is for both job seekers that are actively looking for employment and employers who are actively looking to fill vacancies within their organization. With this App employers can recruit and fill vacancies much faster which in return, allows job seekers to get paid much sooner. It’s not only an App where the screening and interviewing process takes place, but the applicant can start the interviewing process without waiting for a reply or to be invited for an interview.
-Max Carey

The design was entirely up to me for the most part of the project. I was given flow charts and some minor wire-frames to work with however I was given a lot of freedom for the most part and that was great. After I had created the majority of the application, I then worked closely with my client to tweak the designs until they were of a perfect standard. My inspiration for this project sprouted from my love for app design. I had always looked up to design teams on Behance, “FrenchToast” being among my favorites. I think the way they present their designs is impeccable and if I ever got the opportunity to work alongside them I would be incredibly privileged.

The most important advice I could give to any designer is to set yourself goals. You can achieve your desires if you work for them. Anything is possible if you work hard at it, and if you have enough passion for that particular desire, it will make the feat even more reachable. Just work as hard as you can and don’t let anybody tell you that you can’t do something; prove them wrong.
-Max Carey

Max Carey is a 17-year-old Graphic designer from the UK. His main focus is Application design, however, he practice and produce in other areas of design such as; Branding and Identity, Photography and general graphical editing. With every single one of his projects, he aims to produce designs to the very best of his ability. He has worked with a number of small clients whilst studying all of which have been overly pleased with the designs he had created for them. With every design, he intends to push his own boundaries and work until he achieve what he expect of himself. See more of his work at Behance.