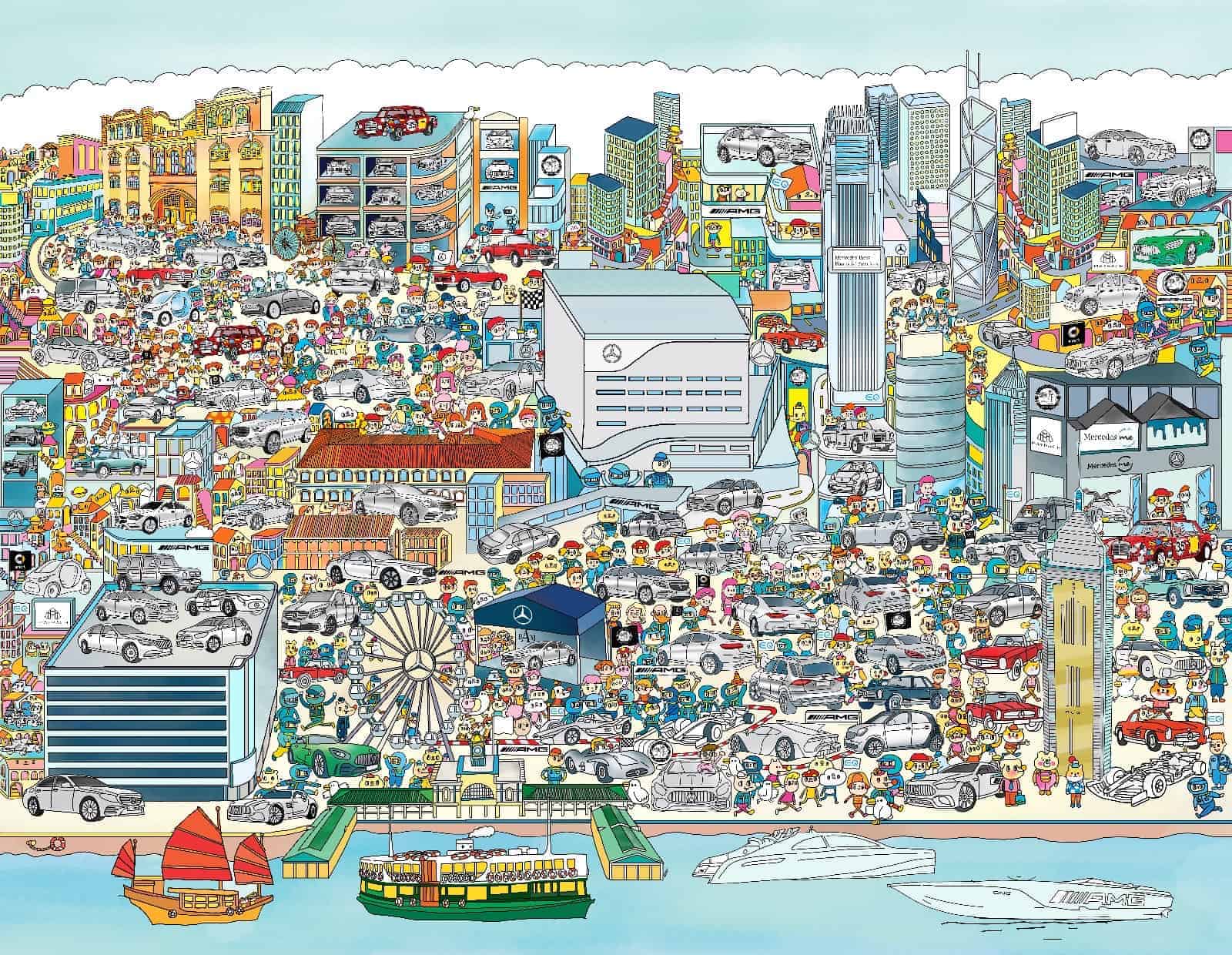 Mural Painting 4000mm (w) x 3100mm (H) inside Show Room at Mercedes-Benz HK Office. The graphic is designed with "Where's Wally" style. All signature models of Mercedes-Benz and it Asia CEO are hided in the painting. Art direction is to create history and present. 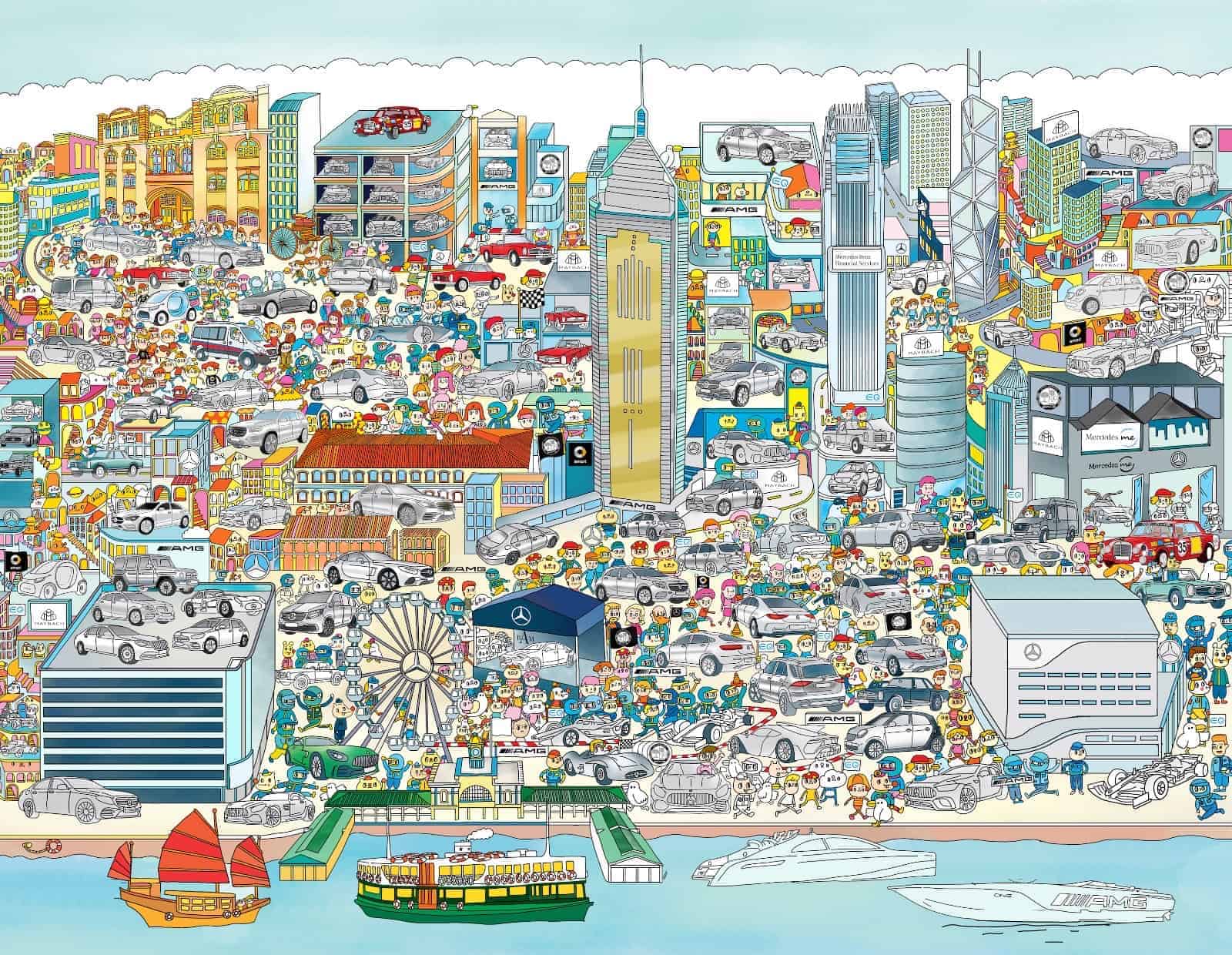 Having understand the need of our client, we developed the idea to connect history with present in a playful way. We first requested our client to suggest all their signature models from very beginning to now. All these cars were hided in model HK architectures to give a taste of local favor. To make the content richer, we have drawn lots of people and standard models in the illustration. Most importantly, our client's Asia CEO is hided in it, are you able to figure him out? 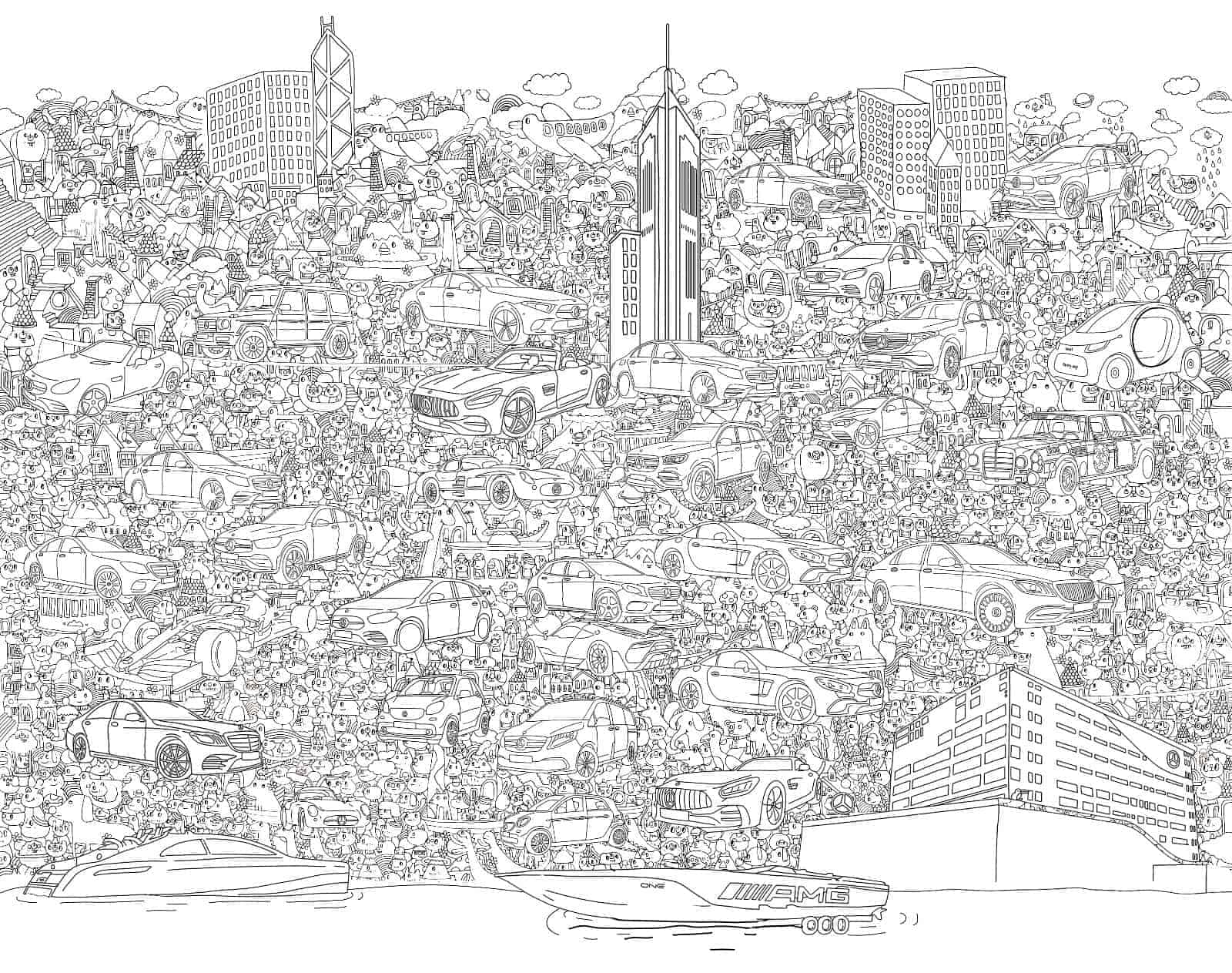 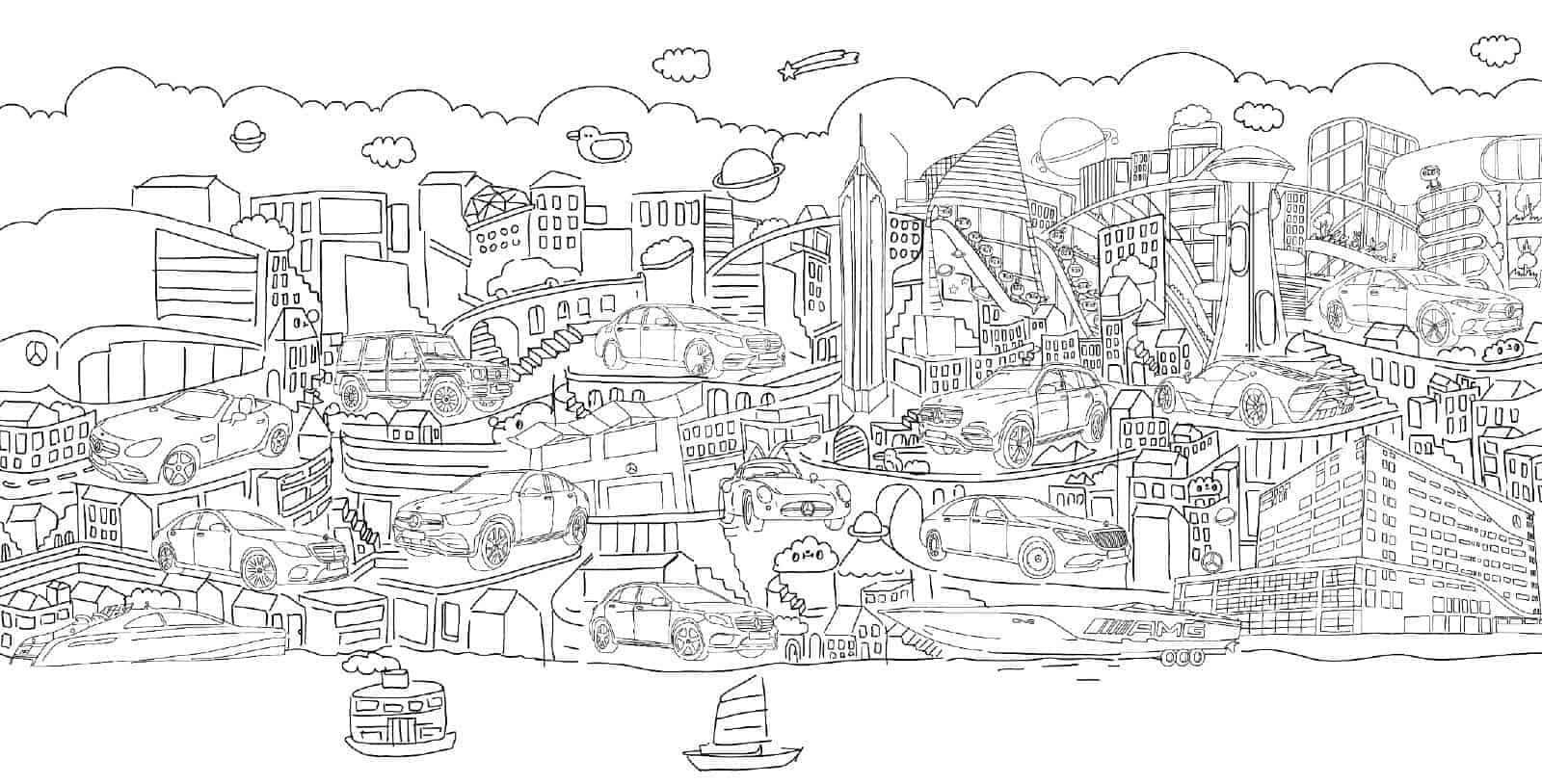 At the beginning, artist drew sketch on paper, then painted sketch on screen by artist which will converted to digital file on computer. Having the final (in black and white) confirmed ,artist used AI and photoshop to color the illustration. Once the final version is confirmed by client, the design is hand-painted on wall. 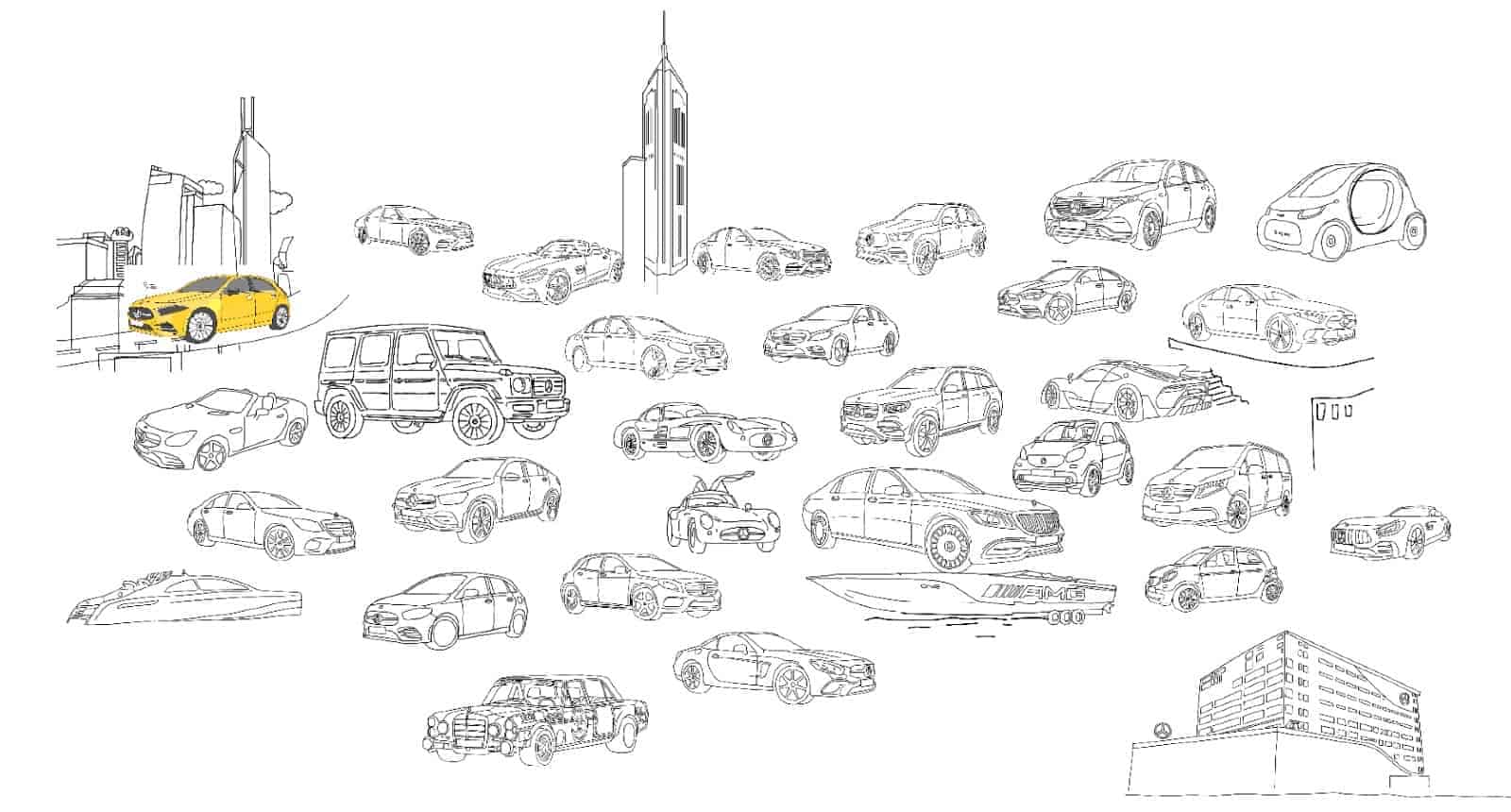 Mercedes-Benz HK included our mural painting as a part of their new staff induction for staff to learn about Benz's signature model developed since their establishment. As the wall is inside the Show Room, all visitors can learn Benz's history from our mural in a fun way.

It’s drawing is full of joyful characters, animals, happy faces inter-waving between buildings, rainbow and even outer space, her art is carefully crafted stroke after stroke, the result is high density landscape with an explosion of colour, frantic as it might seem at first glance, while on close inspection each piece of her art is full of emotional stories, like charming little treasures hidden in plain sight, awaiting to be discovered.