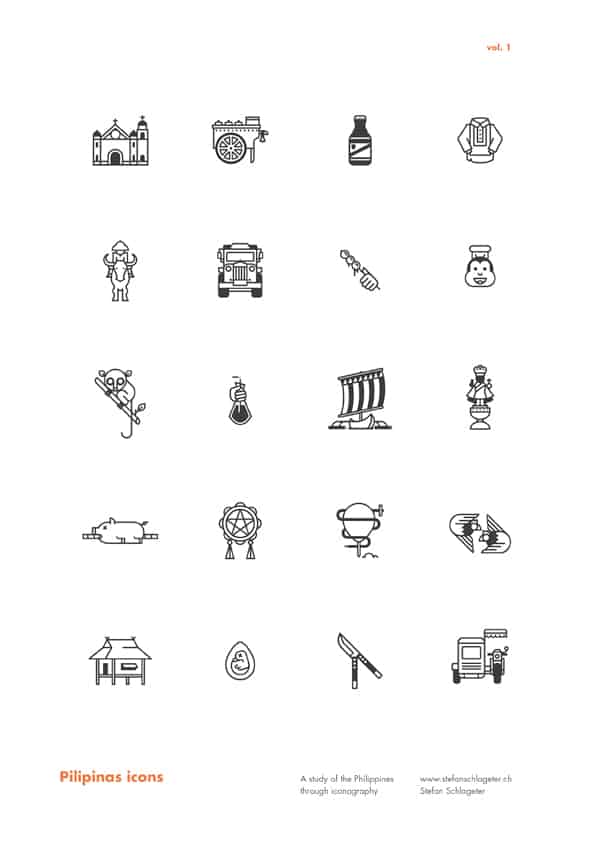 Culture and tradition are the best ways to describe a place or a country much like a project branding. Pilipinas icons was created by Stefan, a Swiss/Filipino designer who has indulged in its culture and has described it accurately. Read on to find out more!

Simbahan
—
A place of worship for Catholic Filipinos, simbahan can be found in every barrio or barangay all over the country. With Catholicism embedded in Philippine history, simbahans have served significant purposes such as war fortress and evacuation center. 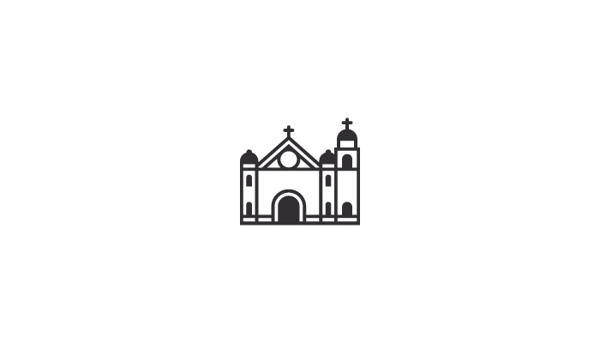 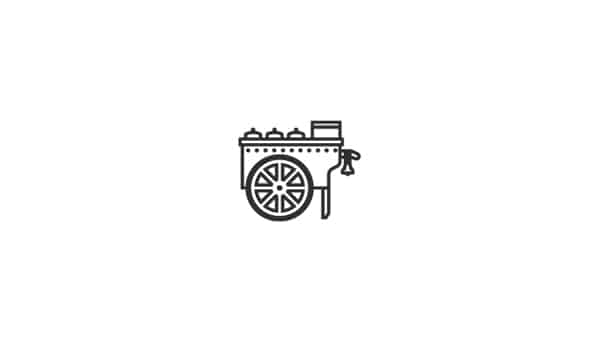 Bir
—
After a hard day’s work, locals relax and unwind with their favorite local brews (San Miguel or Red Horse). Philippines is the 2nd biggest alcohol drinker in Asia, and the #1 beer-drinker in the region. Go to any restaurant or sari-sari store, and you’re sure to find some beer supply. 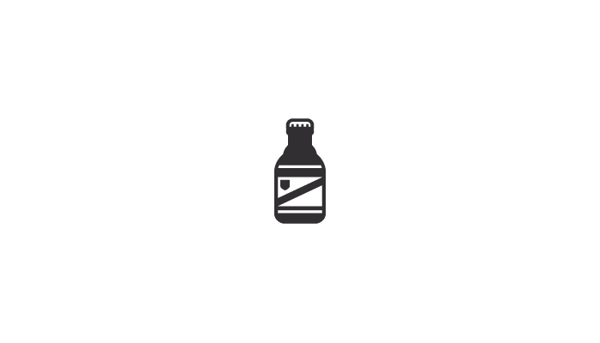 Barong Tagalog
—
The Barong Tagalog is the staple attire for formal events such as wessings or award ceremonies. Made from Piña cloth (pineapple fibre), this clothing boasts of a delicate and elegant look and texture paired with intricate embroidery. 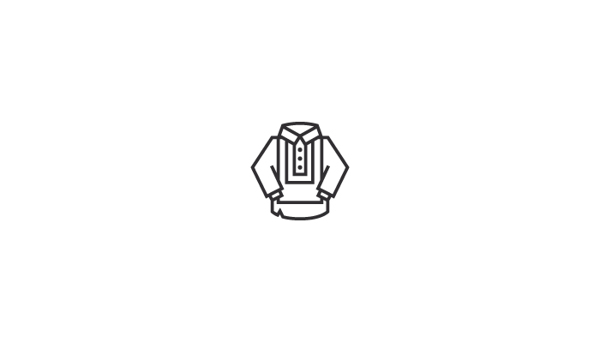 Kalabaw
—
The carabao is a subspecie of water buffalos commonly found in Southeast Asia. Local farmers use carabaos to plow the fields and as a means of transportation. It is one of the most important animals in the country, especially in agriculture thus becoming the symbol of the Filipino people’s hard work and sense of industry. 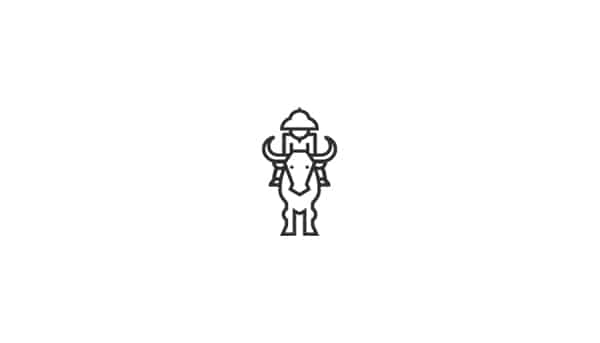 Jeepney
—
The most common public transportation in the Philippines are the jeeps or jeepneys. They are made from US military jeeps that were left during the WWI, and re-worked and designed to fit the needs and the taste of the public. Often with flamboyant and colourful design, it has become a ubiquitous symbol for Filipino culture. 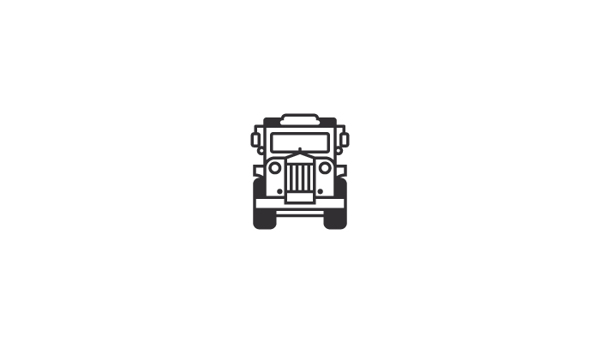 Fishballs
—
Southeast Asia and streetfood are inseparable subjects. In the Philippines, one of the most common streetfoods are fishballs. They are sold by street vendors pushing wooden deep-frying carts. The balls are skewered, and offered with different dipping sauces such as spicy, sweet and sweet/sour. 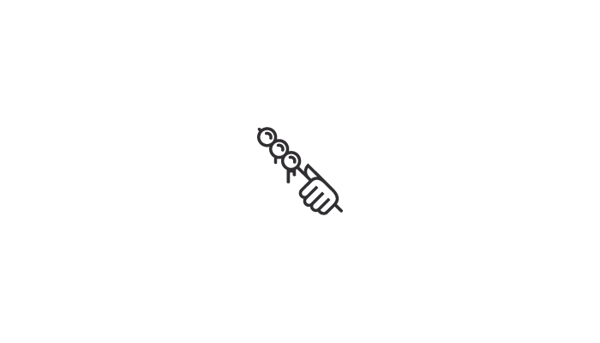 Jollibee
—
Jollibee is the biggest fastfood chain in the Phili-ppines. It is an American-style fast-food restaurant with Filipino-influenced dishes specializing in burgers, spaghetti, chicken and some local Filipino dishes such as pancit palabok. 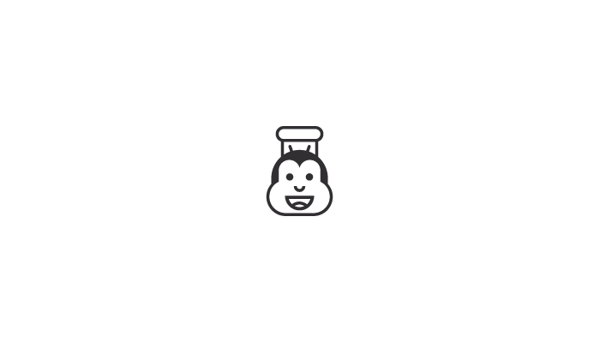 Tarsier
—
Commonly known to inhabit in the island of Bohol, Tarsiers are small nocturnal animals with enormous eyes; each eyeball is approximately 16 mm in diameter and is as large as its entire brain. Tarsiers have extremely elongated tarsus bones of the feet, thus their name. They are extremely shy, and they sleep and forage alone. 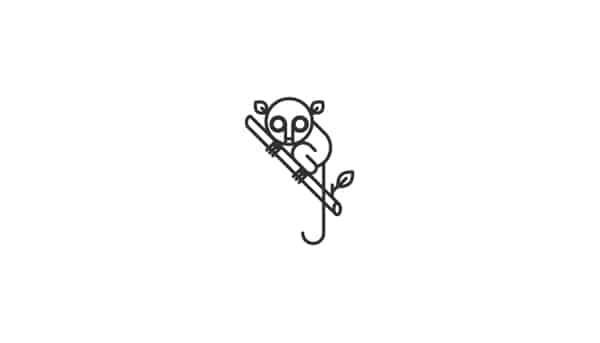 Sopdrink
—
Thirsty? Buying a softdrink or soda from any sari-sari store or street vendors offers one the fizzy drink in a transparent plastic bag with a straw. This is to avoid losing the bottles that the vendors have paid deposit for to retailers. 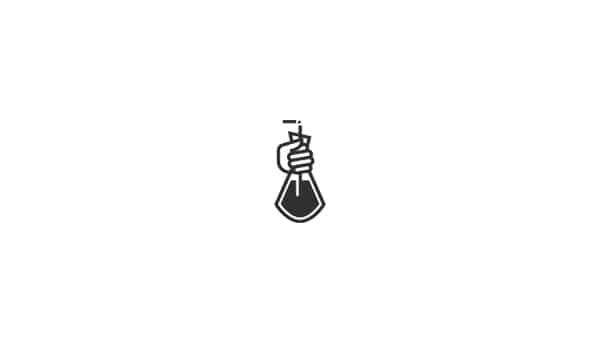 Vinta
—
Vintas are traditional sailing boats in the South of the country. The sails of these boats are very distinct with their colourful vertical colours signifying the colourful Islamic history of the Mindanao region. 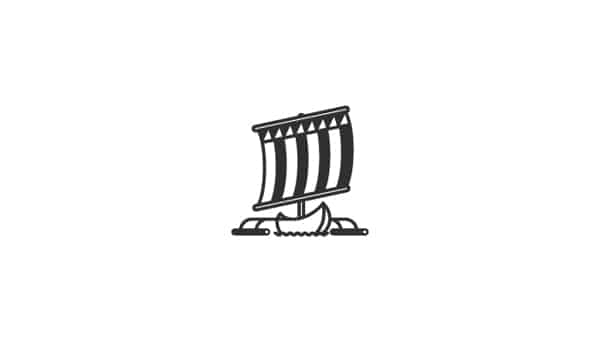 Santo Niño
—
Santo Niño is a Filipino representation of the Child Jesus, which is typically found in houses of Catholics, and in Catholic-owned establishments in the Philippines. The statue is clothed in ostentatious and intricately-detailed cloak, and bears regalia that include a gold crown, globus cruciger, and sceptre. 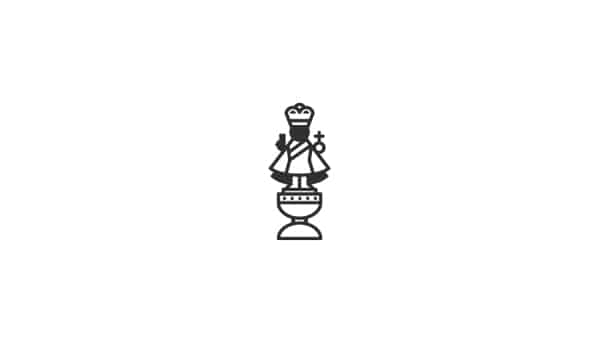 Litson
—
Lechon is a mainstay at important Filipino gatherings. Be it a birthday, a wedding or perhaps someone in the family graduating from highschool, the celebration definitely calls for a litson
(cebu-style or otherwise). 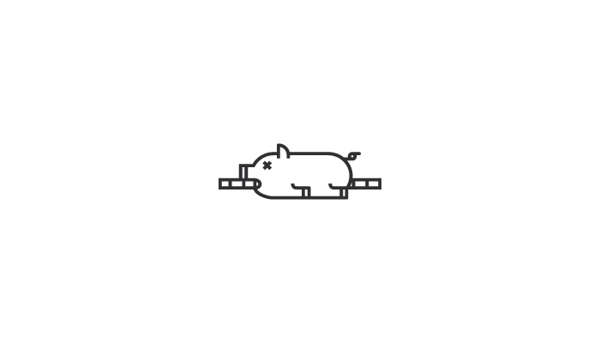 Parol
—
The parol signifies the star that guided the three wise men to the manger where Christ was born. Homes and business establishments alike hang their parols by the window or in the patio throughout the Christmas season which lasts from September until February of the next year. 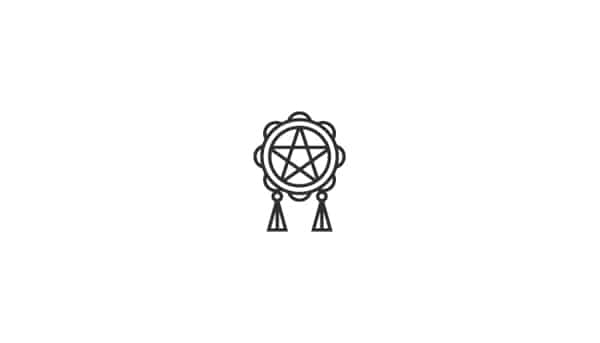 Trumpo
—
A typical toy for boys, trumpo is a wooden top spun on an axis through a string twirled around it. The pointed side of the top is usually an iron nail or sharpened wood. Accustomed or well-trained players show off their skills in the game by catching their trumpo and keeping it spinning on the palm of their hands. 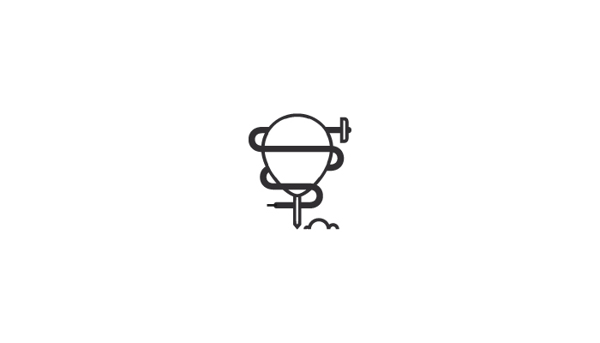 Sabong
—
Sabong is a blood sport between two roosters (cocks) held in a ring called a cockpit. It was first introduced in the Philippines by the Spanish authorities during colonial rule. There are legal cockfights held on cockpits every week as well as illegal ones held in secluded cockpits. 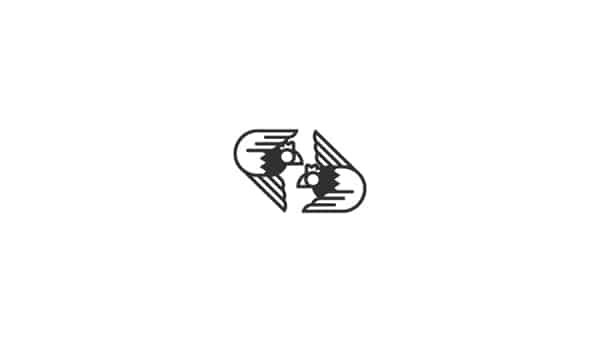 Bahay Kubo
—
Bahay Kubo is an indigenous Filipino house traditionally made of bamboo tied together and covered with a thatched roof using nipa/anahaw leaves. It represents the Filipino value of bayanihan, a spirit of communal unity or effort to achieve a particular objective. 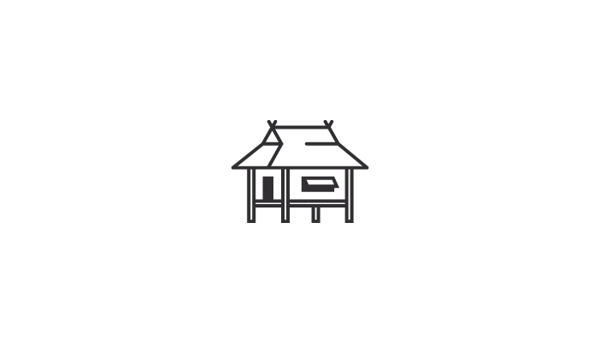 Balut
—
A common streetfood in the Philippines, balut is a local delicacy often enjoyed with a bottle of beer. At sunset, one can expect to hear the voice of the balut vendor as he roams around the neighborhood teasing the locals for a pre-dinner treat. 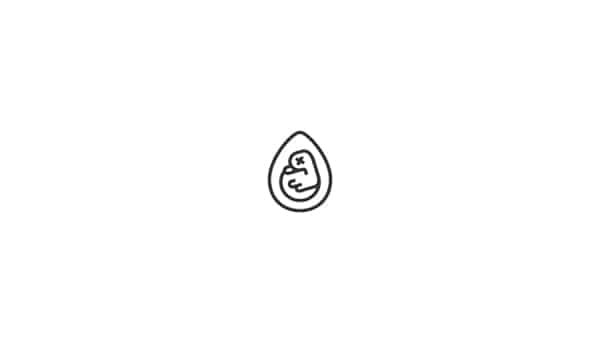 Balisong
—
Balisong is a folded pocket knife that can be opened with one hand. Mainly produced in the province of Batangas, it is commonly used as a self-defense or pocket utility knife. It is called a butterfly knife due to the two sides that flap when opening the knife. 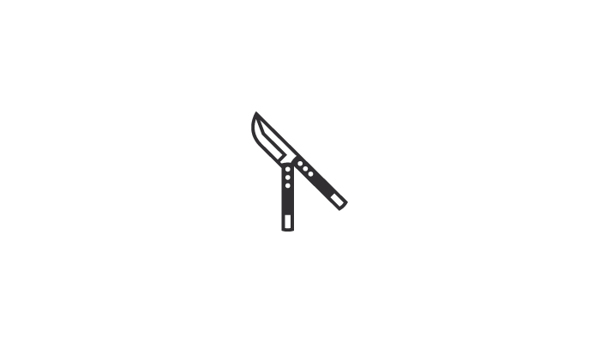 Traysikel
—
Another typical public transportation in the country is the tricycle or trike. It is a motorbike with an attached sidecar, and can usually transport four passengers plus the driver. It is commonly operated for short distance trips such as trips within a barrio or barangay or within commercial complexes. 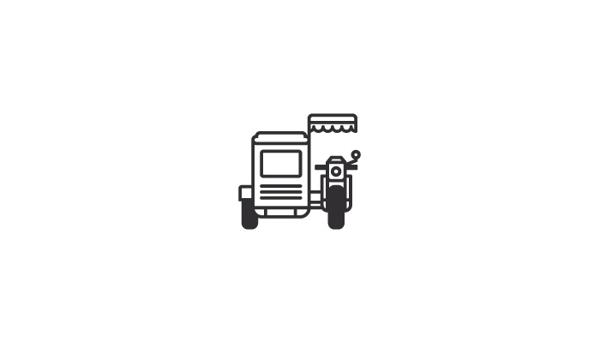 Stefan Schlageter is a graphic designer and illustrator at Rivenord, a creative studio and is based in Lausanne, Switzerland. Find out more about this Swiss/Filipino designer at her Behance.