This image is the first in a short series I made along the theme of American archetypes. I'm playing with versions of Uncle Sam throughout the series and also with the stripes of the American flag. The first drawing is a bit like music. It moves from stylized characters walking to a graphic interpretation of their actions. It kind of looks like a package design gone awry.

I've posted the final version and the line drawing rough I did in my sketchbook as well as a few other images from the series.

My work almost always begins in a sketchbook. Or on a paper scrap. For this drawing I had a picture and a feeling in my head and I tried to put that down on paper. I tend to generate themes and once I arrive at a viable theme I make a series. I was thinking of character narrative transforming into abstract design. And I was thinking of Uncle Sam and Johnny Appleseed.

Design wise it's my contemporary take on what was going on int the late 1970's. Milton Glaser and commercial pop artists like that. Except that here the narrative is abstracted and self referential.

I've used bright colours muted by the texture I laid over them all. The texture gives it weight and presence. It actually invokes a sense of a history. It's become a very popular thing to do these days. I used a recycled plastic texture over the final and filtered it until it began to look like stone. I like mixing in textures so I will often drop something over the final art, something from this massive library of textures I've created. Invariably I use the same two or three textures for the most part. 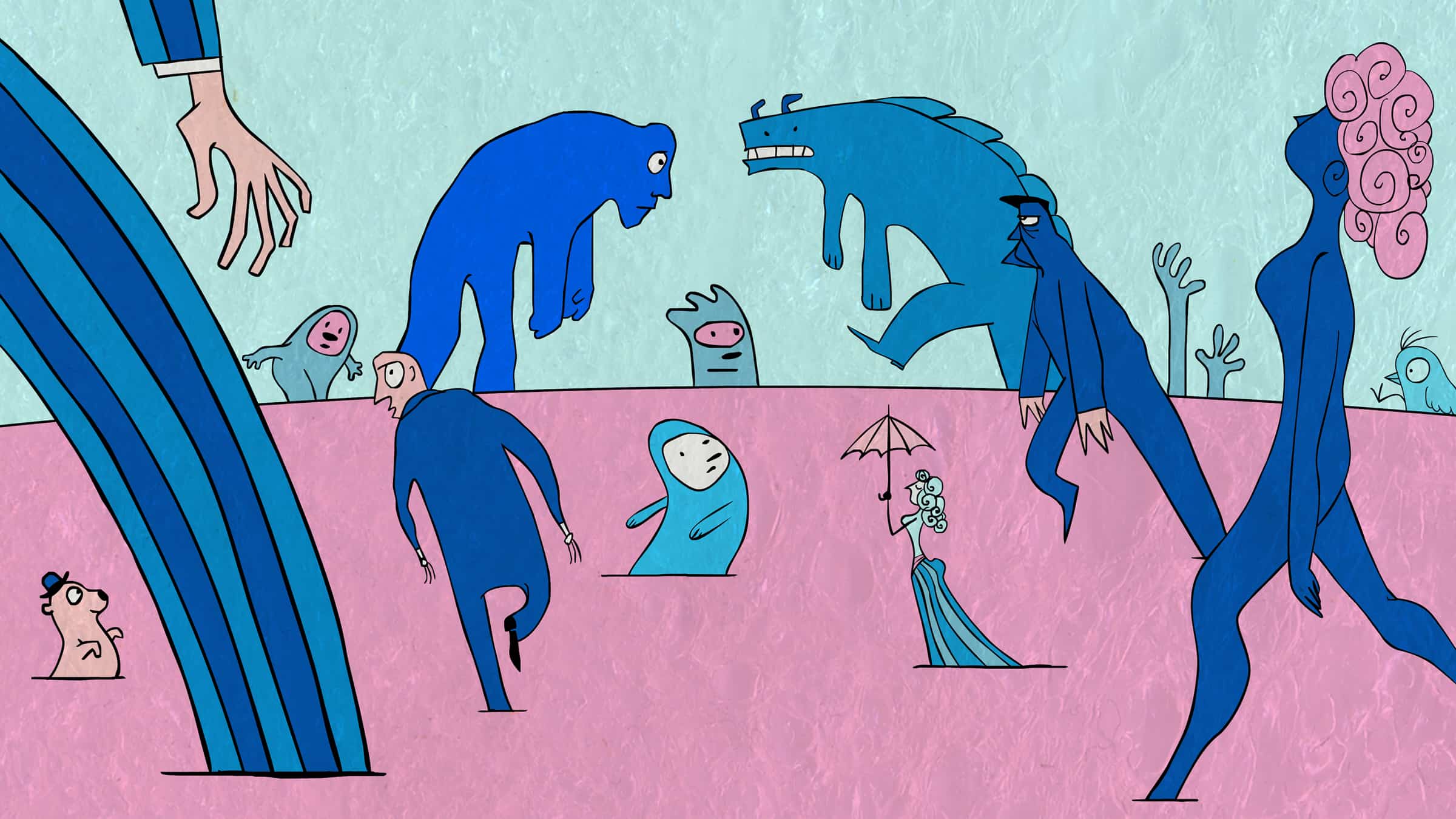 Like I mentioned most everything I create will start in a sketchbook. I have a room full of them. Then I scan the roughs into the computer. I might mix and match a few parts in Photoshop before bringing them into Flash and recreating it on a cintiq tablet.

Well it used to be Flash. Now it's Animate or Toon Boom. I like the pressure sensitive vectorized line I get in those programs. In Flash if you messed with the line enough you could get a line that looked like it was drawn with pen and ink. It's a bit more work in those other two programs but it's still possible.

There is no tool more important for me at the moment than that tablet. It's not perfect but the advantages are formidable.

I paint the drawing up roughy and then I bring it into photoshop to add some textures and adjust the palette a bit. If it needs to go vector I will use Illustrator but this project didn't require that. I had a fairly positive response to the project! My work exists slightly outside of its time frame and always has. This particular series led to another, similar and
even more graphic series that landed me a few book covers.

If I learned anything from the project it was to stop drawing roughs on textured paper meant for watercolours. It wears your pen down really quickly.

Learn to see your thoughts!