Snatch is a 2000 crime comedy film written and directed by Guy Ritchie, featuring an ensemble cast. The film comprises two entwine plots. The first one is the search of the stolen diamond while the other one is about a small time boxing promoter who finds  himself under the thumb of a heartless gangster who is ready and willing to have his deputies carry out relentless and sadistic acts of violence. The film is also set in the London criminal underworld. In this article, you will see a fanart movie poster of Snatch created by a talented illustrator, Levente Szabó.

It is definitely a fan art, as Snatch is one of my favorite movies of all time. I've seen it at least six times and I can quote lengthy parts of Brick Top's (the main villain) fantastic monologues at any time. I understand that you have to show the famous actors in the front, but the movie is quite funny, dense and violent, while compared to that the Snatch posters and DVD covers were bland in my opinion.

My goal was to capture the chaos, hilarity and the intertwined plot-lines of the movie in one image. After the initial sketches I ended with the "arm theme" with the stolen diamond in the middle – which jump-started the whole affair.
I was really happy with the subtle play of the hands missing the stone as it was never acquired by the bad guys.

With the arms filling the poster it was an obvious choice for me to pay a tribute in style to the magnificent Saul Bass as well. 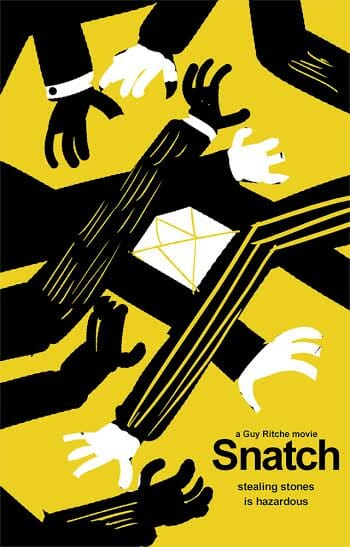 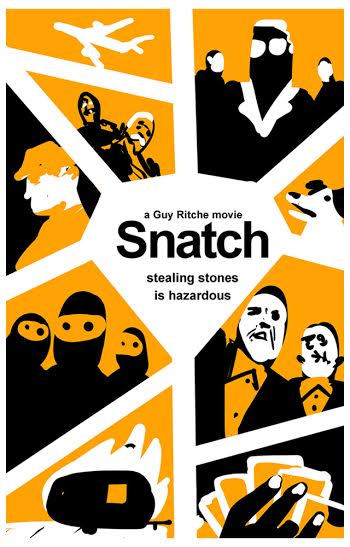 This movie is one of his top 10 movies in all time despite its quite violence, the general feel is rather humorous. You can find more of Levente's works on his Behance profile or website.