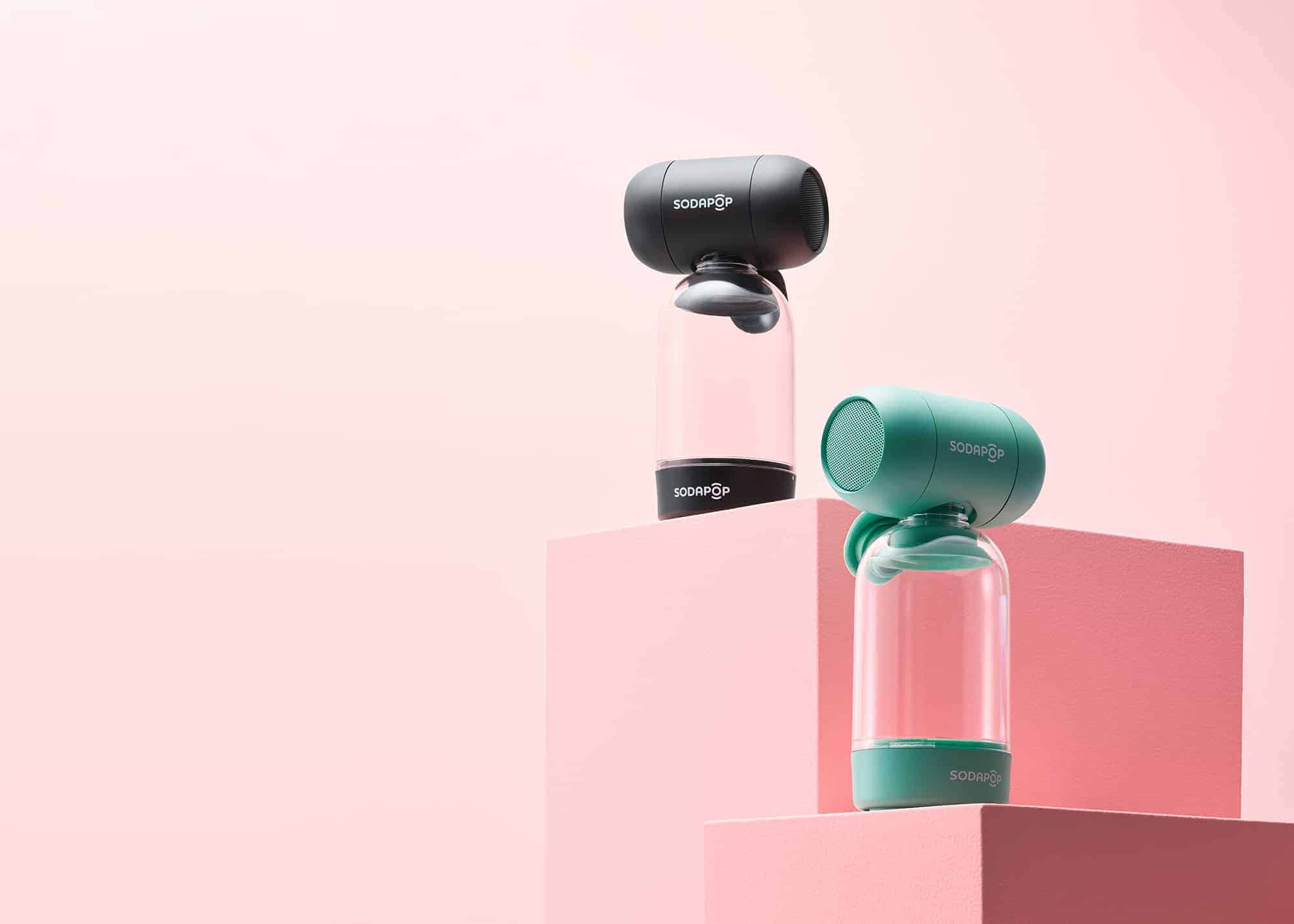 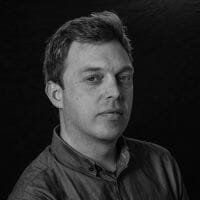 The Sodapop speaker has been designed to solve the main problem for small portable loudspeakers: They struggle to reproduce low-frequency bass, resulting in a somewhat feeble sound.

The Sodapop invention solves this problem by connecting the speaker to its own carrying case or any other suitable plastic bottle. This offers a compact portable wireless speaker that provides you with louder music, twice as much bass, and an overall superior sound. 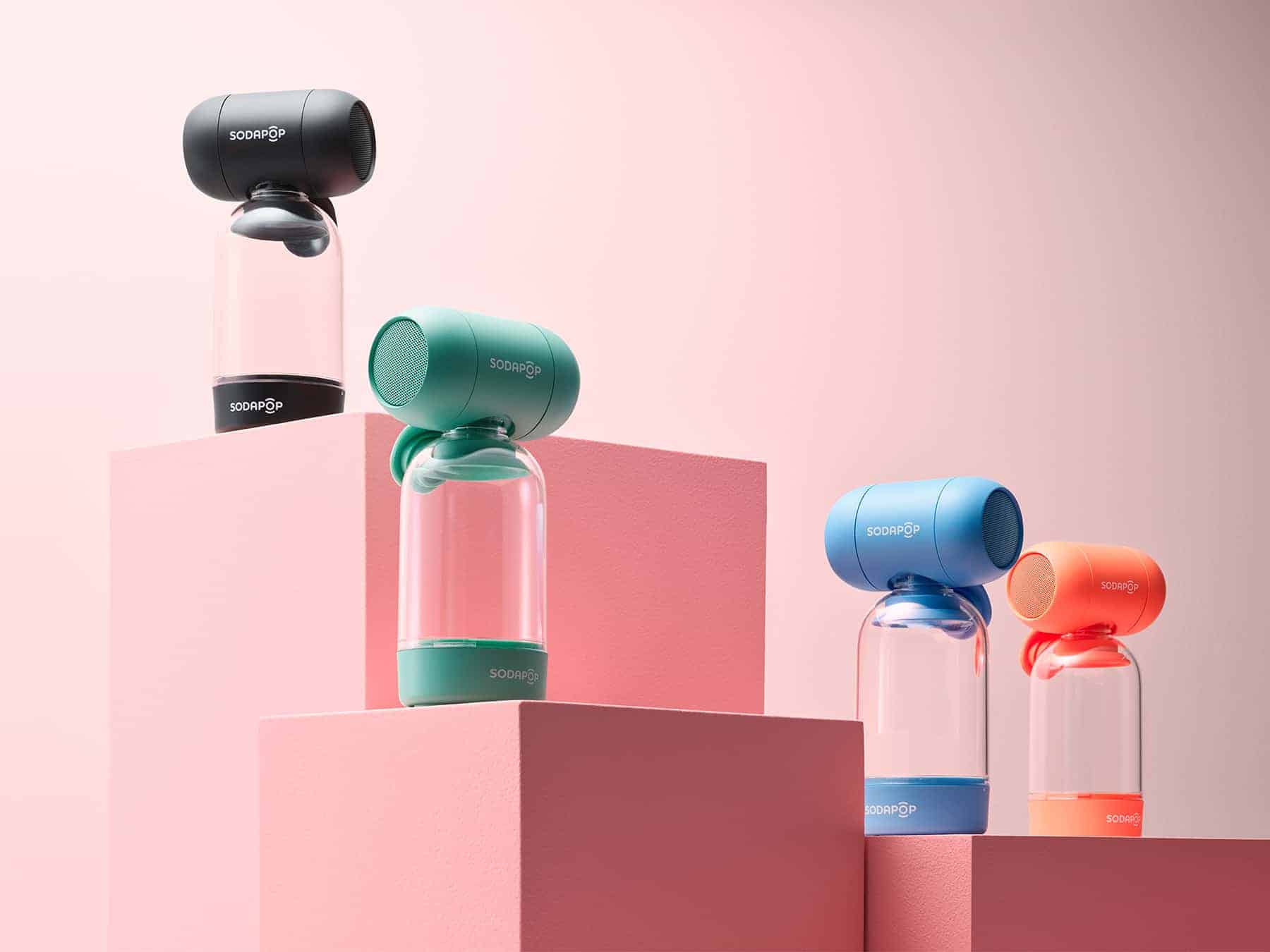 We were contacted by a small tech-startup in 2017, bringing with them the idea of connecting av regular bottle to a small portable speaker for improved sound. They had even made a simple prototype combining a soda bottle and a cheap speaker with a drilled out hole. We immediately saw the potential for an innovative playful project.
As the project evolved the specially designed bottle was developed, both to improve the sound quality and elevate the overall design of the product. This is also a patented feature.

All projects at Permafrost starts with a visual analysis, describing the aesthetic guidelines for the design process. Working with a newly founded company on their first product we needed to balance the creative playfulness with the technical sound performance. 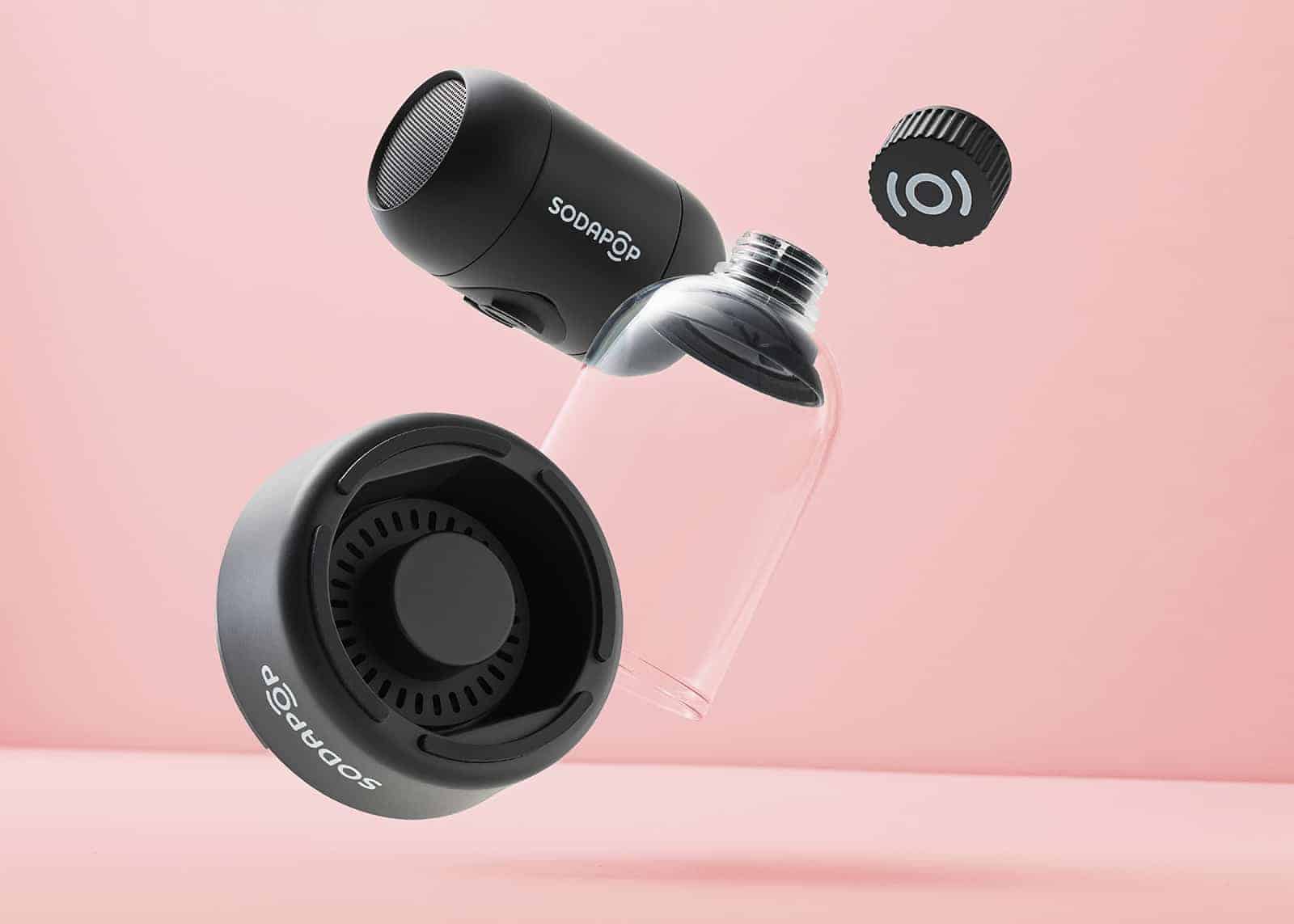 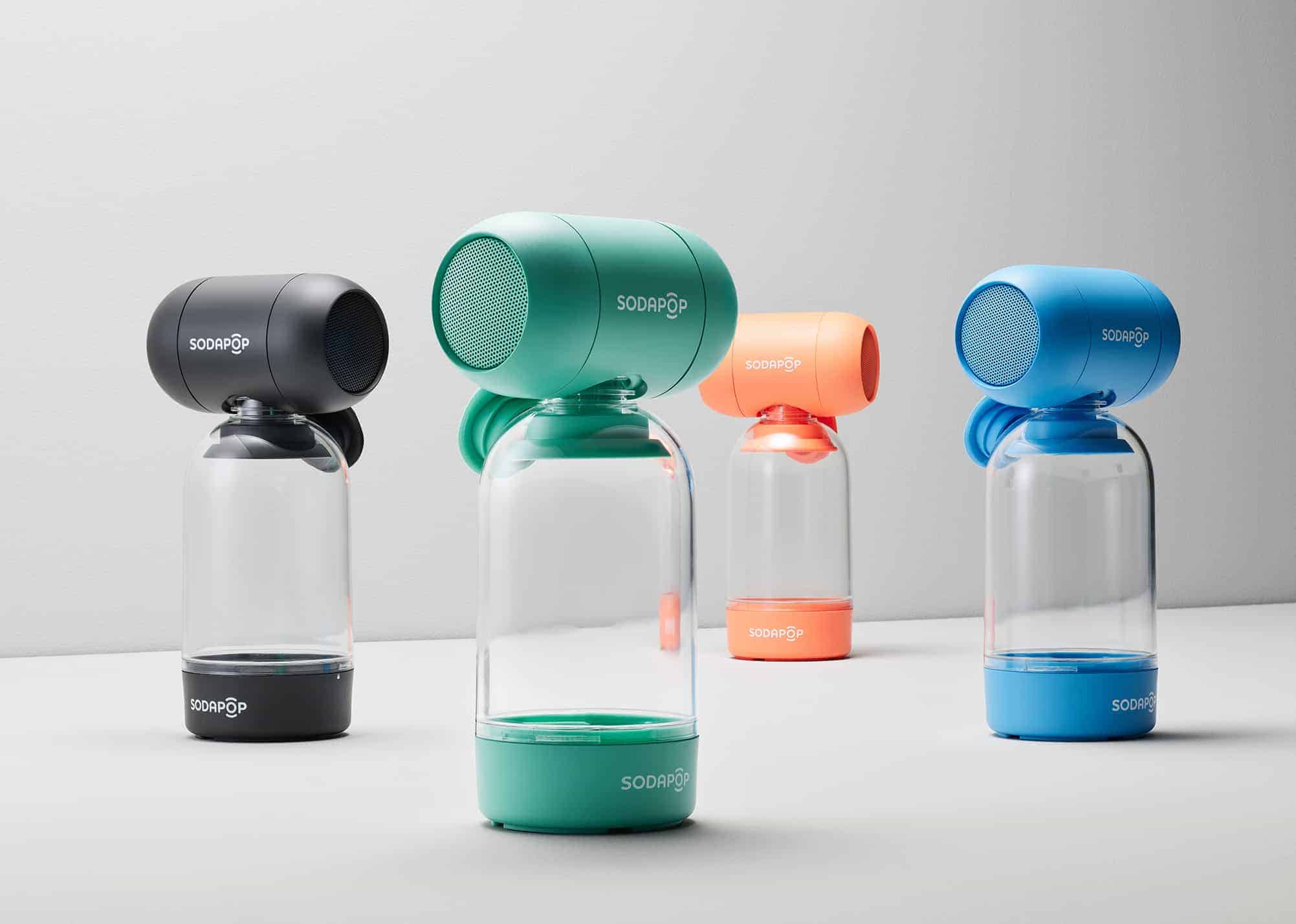 The development team includes a professional sound and acoustics expert helping to optimize the performance and design using sound labs throughout the entire process.
From the very start of the project in-house 3D-printing has been very useful, both for concepts, functional prototypes for testing, and the final refinement of details and surfacing.
Permafrost has three Ultimaker printers, and we use SolidWorks for 3D modeling. Throughout the whole process we work in parallel with gathering inspiration for every stage of the process. For example sound, portable playful products, colors, and inspiration for details.

The Sodapop logo was developed on the basis of the visual analysis to blend with the product design. The integrated "popping" O also works as stand-alone symbol. 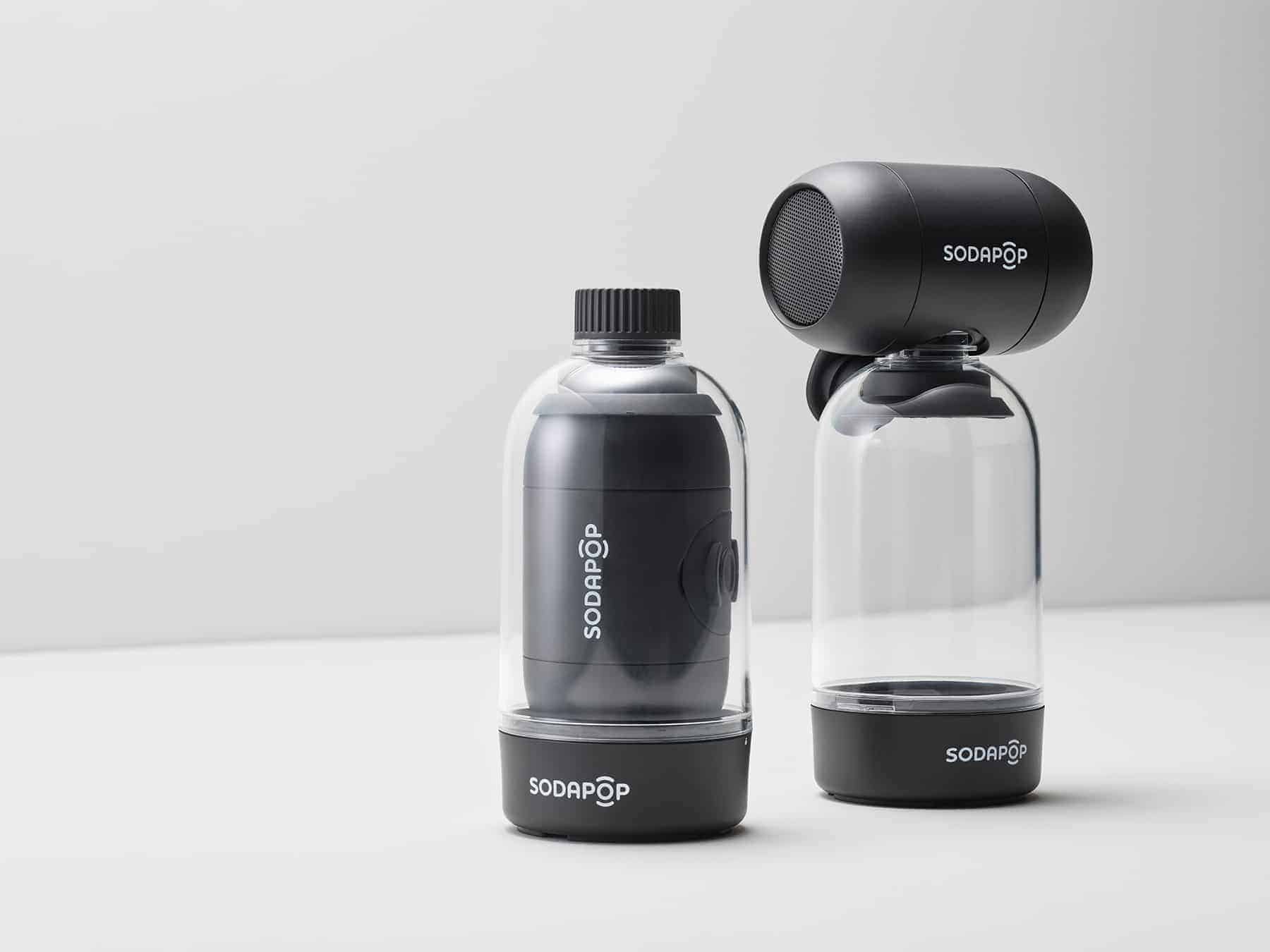 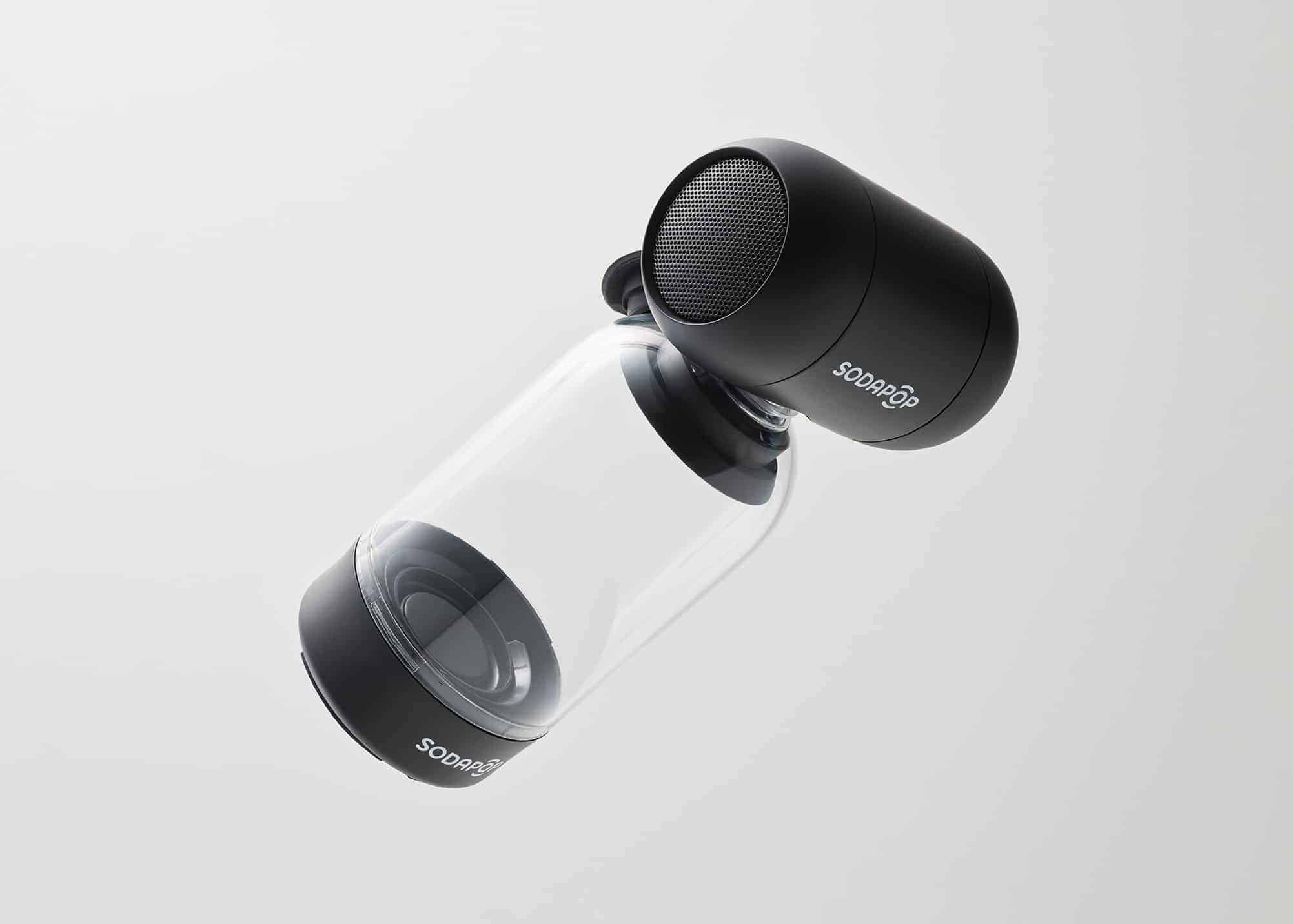 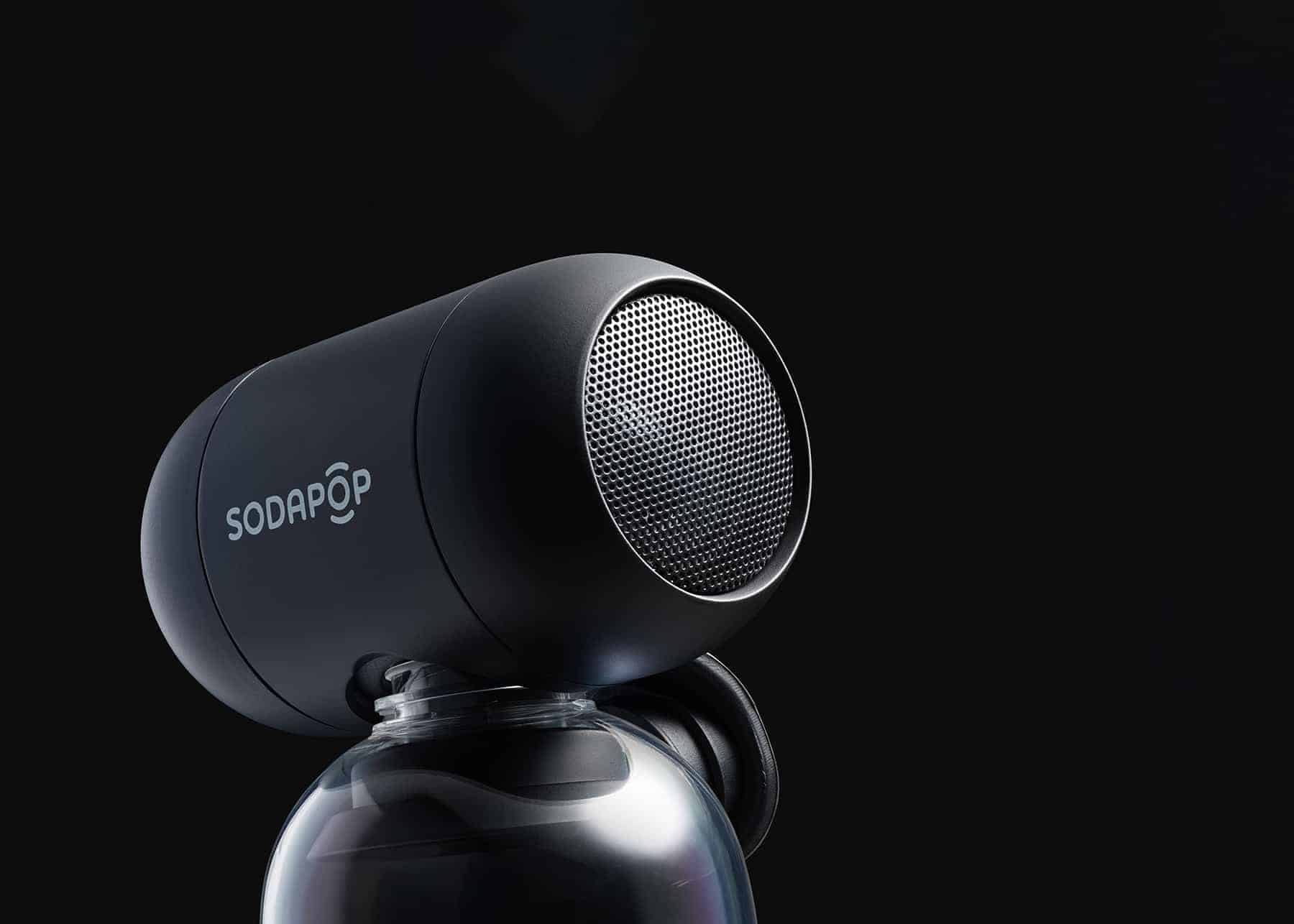 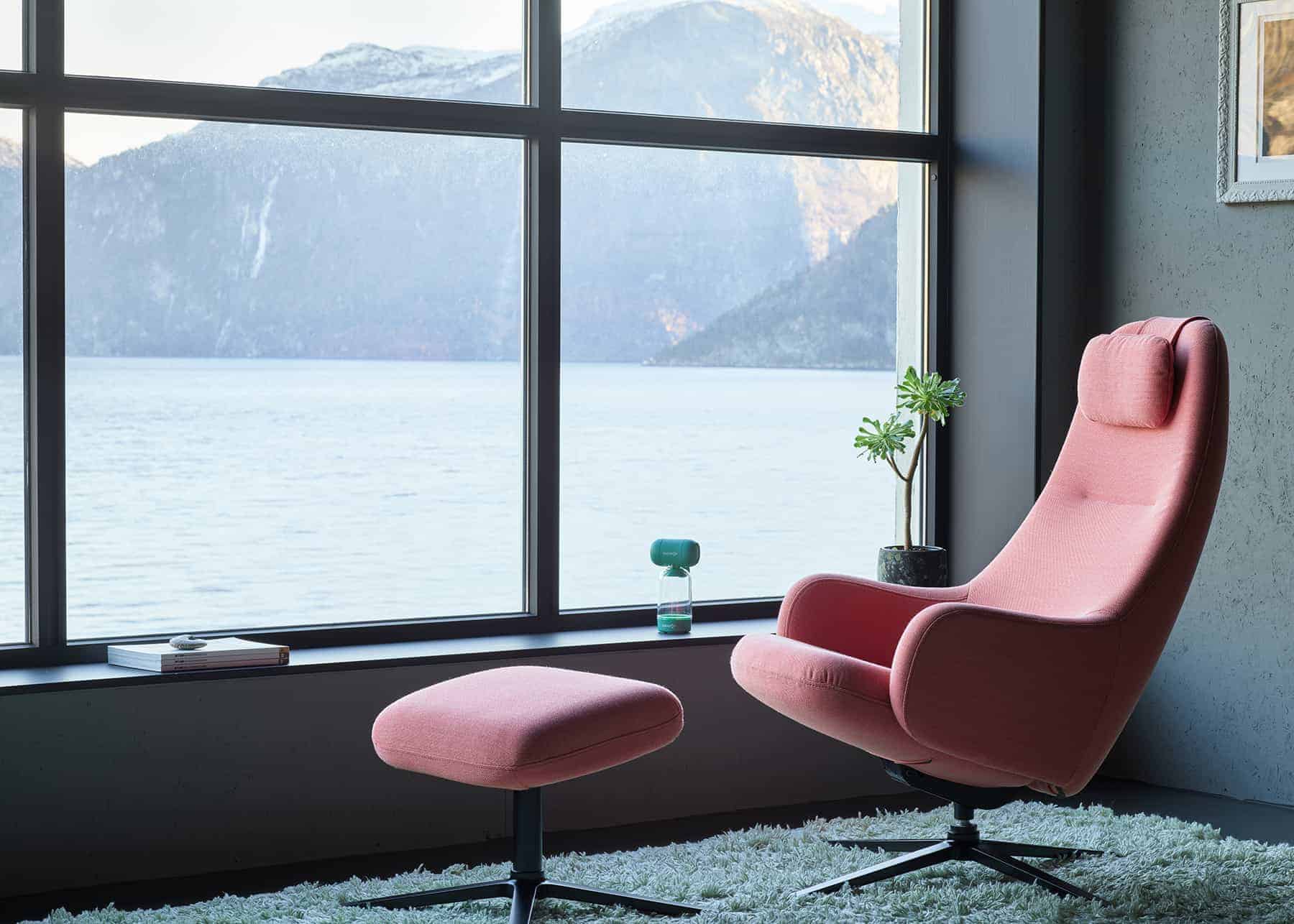 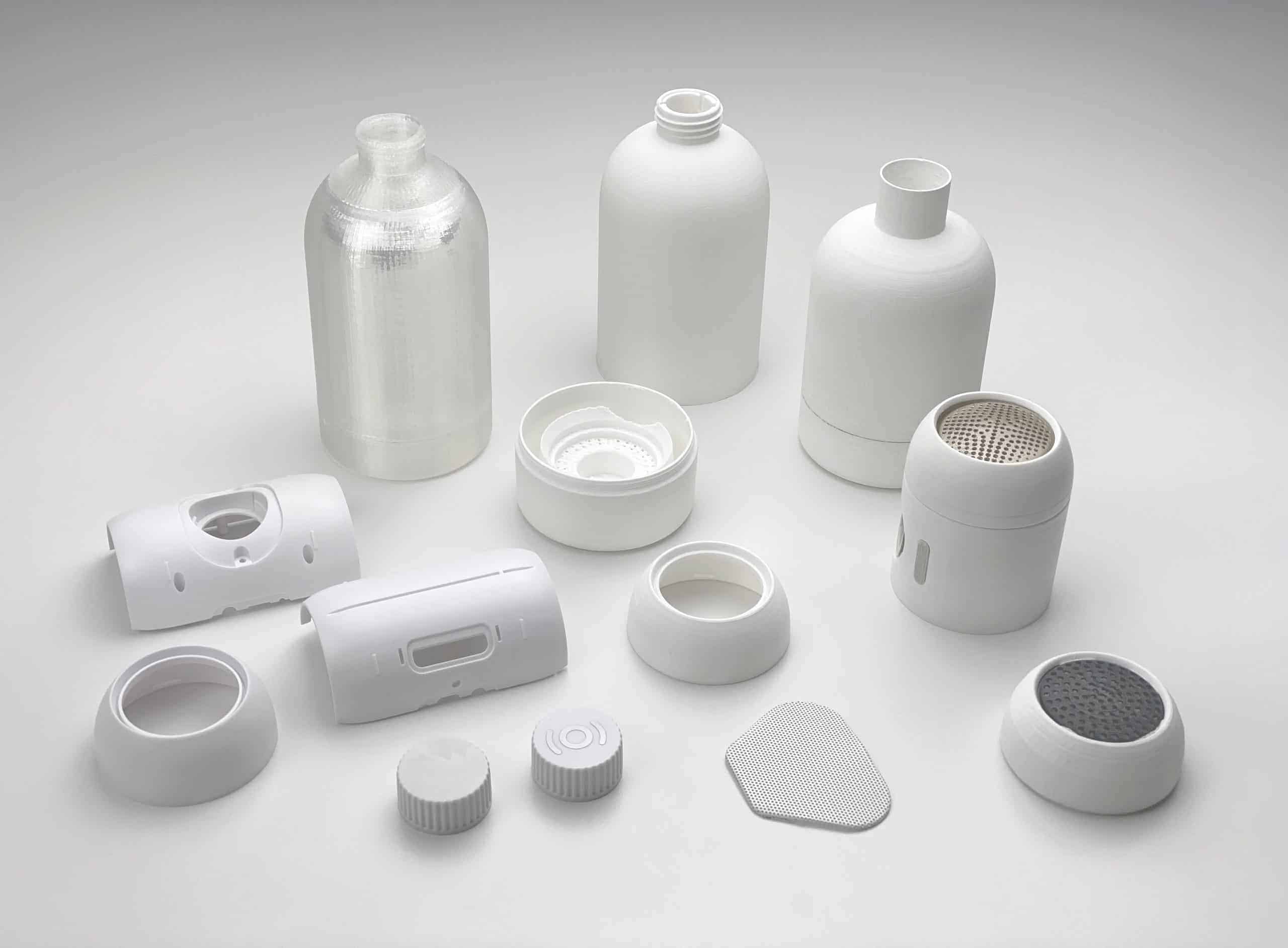 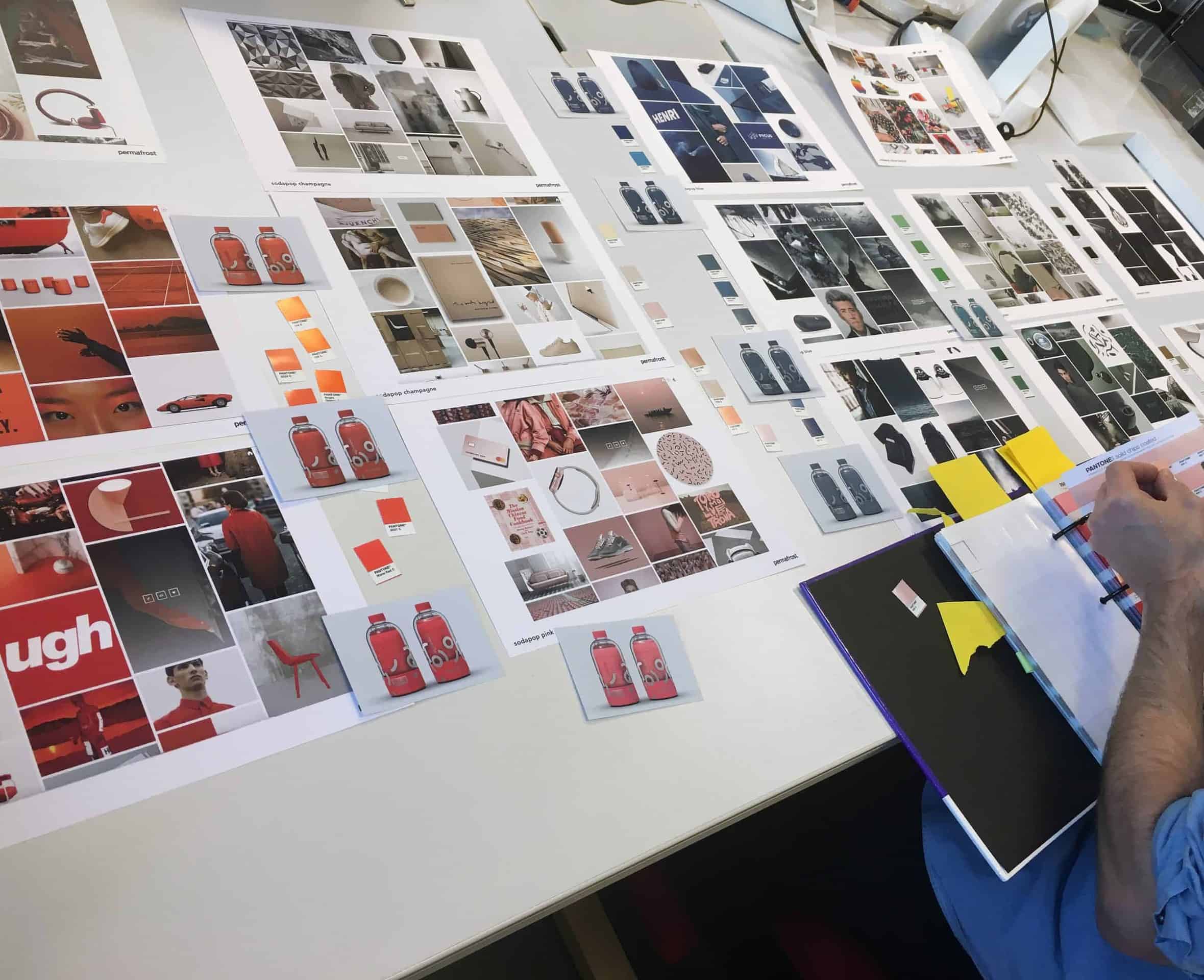 Sodapop was successfully funded on Kickstarter late 2018 and was shortly after contacted by Pepsi Co. to be a part of their launch of their new Pepsi Lime and summer campaign 2019 in Scandinavia. Sodapop have had a lot of response from Scandinavian press and received 6 of 6 stars in the largest test magazine (L&B Magazine). Sodapop is also available on Amazon and has received a lot of positive feedback from the customers (currently star rating 4.6 of 5 as of January 2020 and awarded with the Amazon´s Choice badge for its highly rated and well-priced product ). By the end of December 2019 Sodapop had already sold over 10k units of their first speaker.

Development of audio products is very time consuming and we have learned the importance of being very "hands-on" in all parts of the project, especially when it comes to cooperation with the production facilities in China. Building fully functional prototypes through the project for in-house testing has also been a key component for success. Every time a new prototype is built and tested, it has always brought with it some form of evolution and ideas for new improvements.

By utilizing the characteristics of the bottle material and the air inside the bottle, the Sodapop speaker can increase the sound volume in the bass range by as much as 10dB.
To the human ear, a 10dB increase will sound approximately twice as loud, so in other words, the Sodapop speaker can generate twice as much bass, just by connecting an ordinary soda bottle. The effect is striking once the bottle is attached.