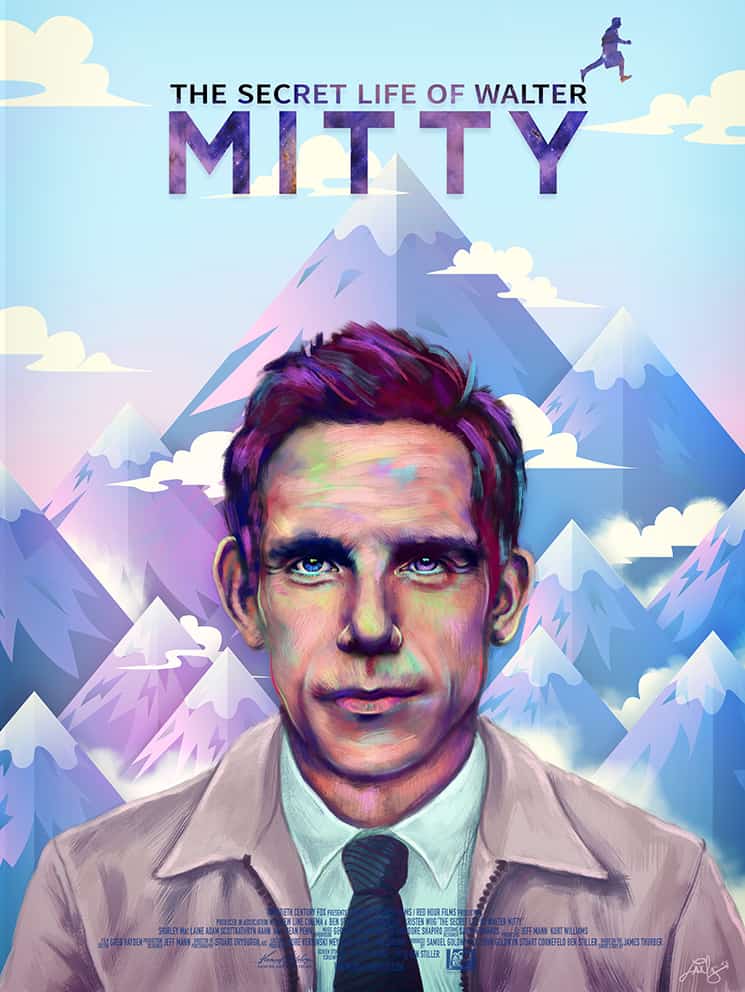 The Secret Life Of Walter Mitty alternative poster is Ladislas Chachignot’s tribute to one of his favorite movie. The movie is a 2013 romantic comedy-drama adventure cult film directed by, produced by, and starring Ben Stiller. This is the second film adaptation of James Thurber’s 1939 short story of the same name. He wanted to create and paint this portrait as an appreciation to the great job that Ben Stiller did on the movie.

I think it’s a great theme and lesson about taking risks and try things in Life, a lot of us can identify themselves in some ways to Walter character in the movie. It’s a crazy adventure and at the same time it’s deeply human, full of hope and dream. My goal was to create this poster and send it online to Ben Stiller as a way to thanks him for his job. I’m grateful he did this movie, it’s a refreshing one. I hope more movies like that will be released in the future.
-Ladislas Chachignot

My inspiration on the project was the visual mood of the movie. I wanted something dreamy, soft and colorful. I was also inspired by the soundtrack of the movie that I listened to a lot while creating. It makes me travel and get into a creative mind, focused on painting and I forget all the rest. I was also inspired by the landscapes in the movie they were very beautiful, majestic and unreal at the same time. I definitely wanted to give this feeling in the whole image, something nice and a bit unreal.
-Ladislas Chachignot My visual identity is a mix between 2 things I enjoy doing – Digital painting portraits and vector Art, so I’ve experimented to mix all that together. Everyone is searching for the “holy grail” personal style as I am too. I think what you like doing defines your style. For me, I know I love portrait and at the same time I love vector illustrations and patterns. So I do that and hope to develop my style in the future, through these things I enjoy doing. If you want to follow my adventure I often post on social medias (Facebook, Instagram and Tumblr) pics of this long path to become an artist. I’m inspired by a lot of things, I would say mainly by movies and nature especially insects and strange animals, I’ve always been amazed at discovering species of animals on earth, we’re searching for aliens everywhere but people should look at some great treasures we have on earth, crazy things that nature created are everywhere if you’re curious.
-Ladislas Chachignot My advice for aspiring artist is something I’ve read at the beginning when I started to focus on illustration : It’s a long path to be successful and it’s not an easy job especially when you try to live from this passion. If it’s a passion for you, well this is a great news, so work on your Art and share it with people don’t keep it for yourself because it won’t lead you very far like that, Art is made to share and to show to people. Often they will give you strength and support for creating things. My second tip is to do things you like doing, because if you like what you’re doing, it shows a lot in your work, if you do this and keep doing this through the years,  your work will evolve in a good way, you will find the path that suits you the most and you’ll be proud to have achieved this milestone to be an artist you wanted to be a few years ago.
-Ladislas Chachignot Ladislas Chachignot is an illustrator and artist based in the South of France. He has always been passionate by images since he was a young kid (preferred watching images in books instead of reading which didn’t change since then). Ladislas studied visual communication and started his career as a freelance designer in France. He used to do a lot of music and was playing in an alternative rock band with his friends for 11 years. After a while, he found himself starving for more illustration. See more of his work at Behance or his website.