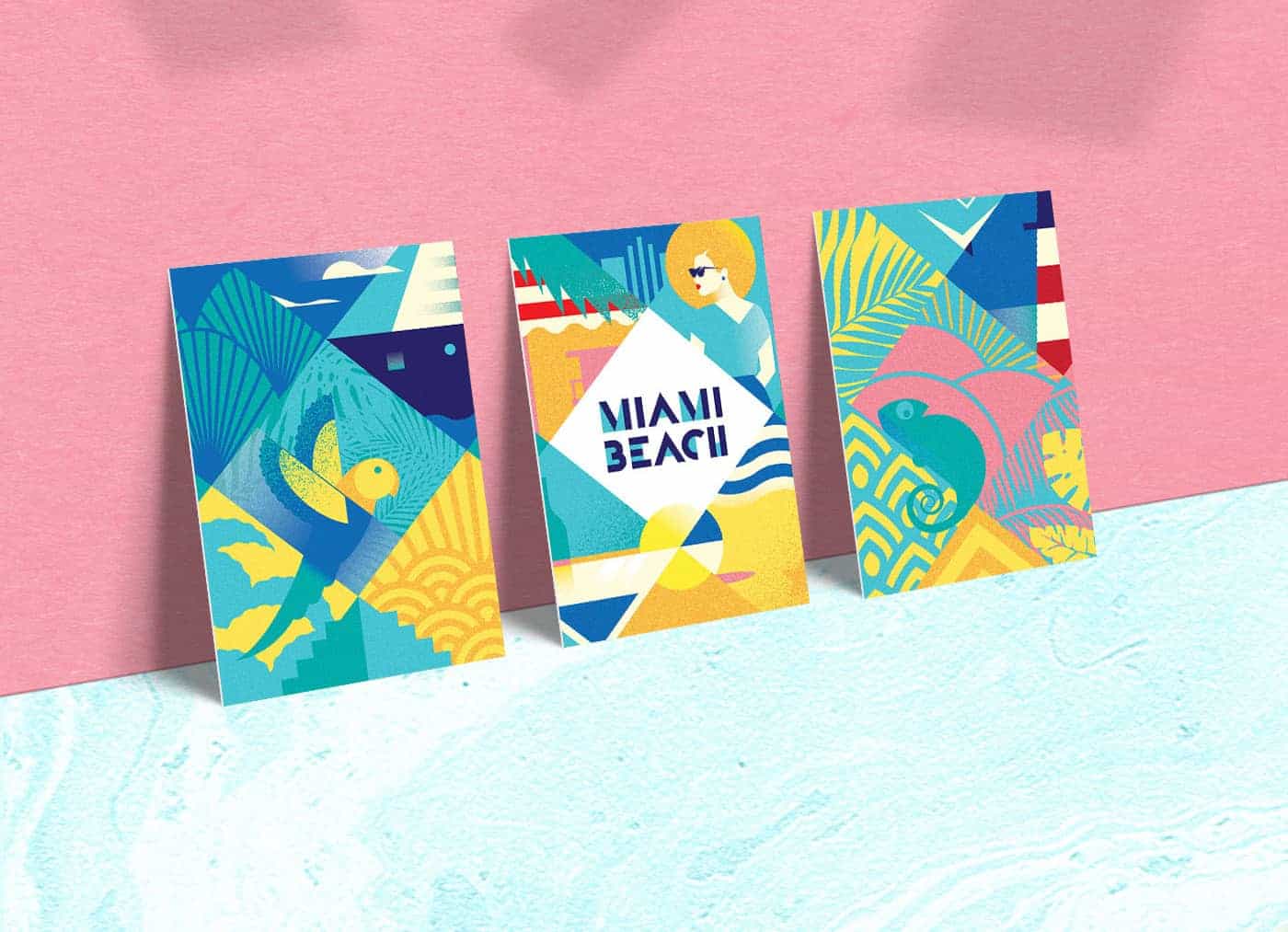 I have created the series of illustrations for the building of Art Deco Center on behalf of MDPL. During the cooperation the decision was made to remain only one wall for the artwork. All other visuals were decided to keep and give them life as the postcards. Now they are all represented in the souvenir shop of Art Deco Center. Tourists can keep themselves a small reminder of Miami and its fabulous Art Deco style. Friends, co-workers or relatives will admire to receive such a bright postcard "From Miami with love..." 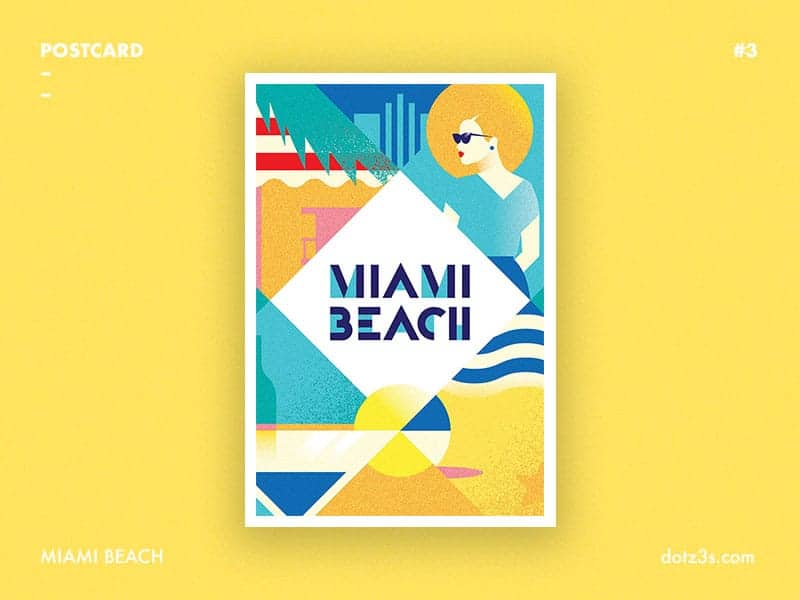 Miami beach is all about tropical and fun. Beautiful beaches, trees and birds are all around. Walking around or riding on the bicycle through Miami beach inspiration comes itself. These postcards combine iconic Miami Beach Art Deco style and my personal vision of it. 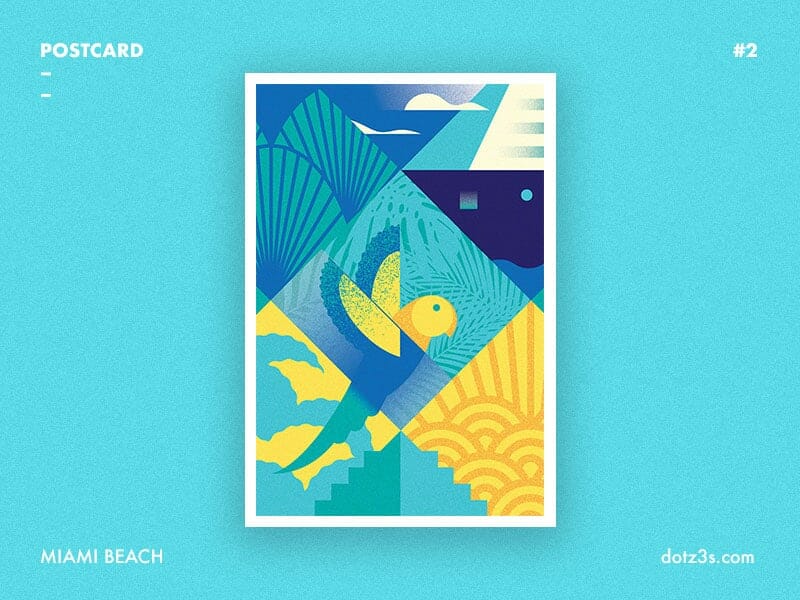 I started my work from the pencil sketch to get with some idea. Then I began to choose colors and I go to illustrator to finish the image. I needed to think over the idea for the whole composition and then to design each postcard, one by one. So in the end I received the series of illustrations in the mood of Miami beach . 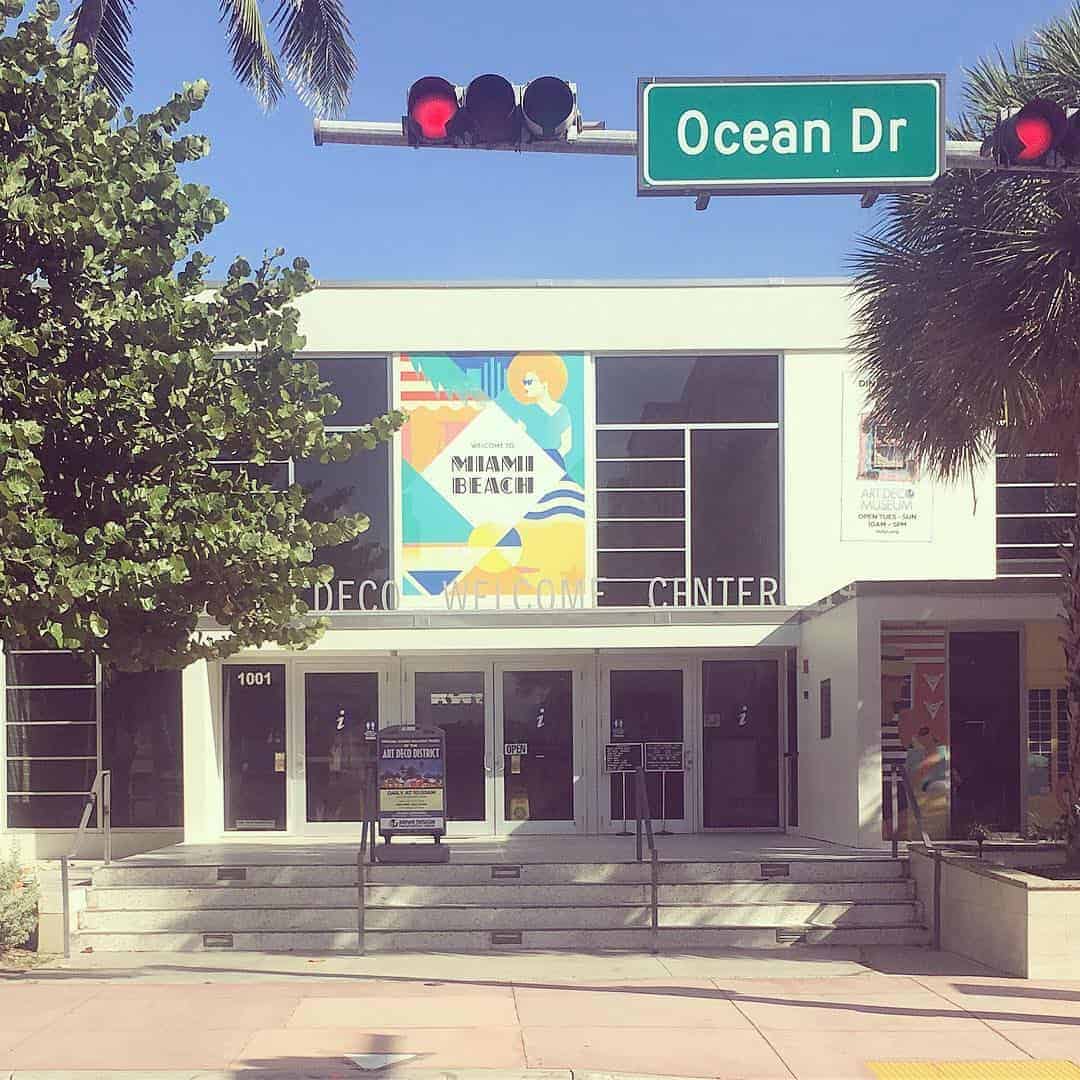 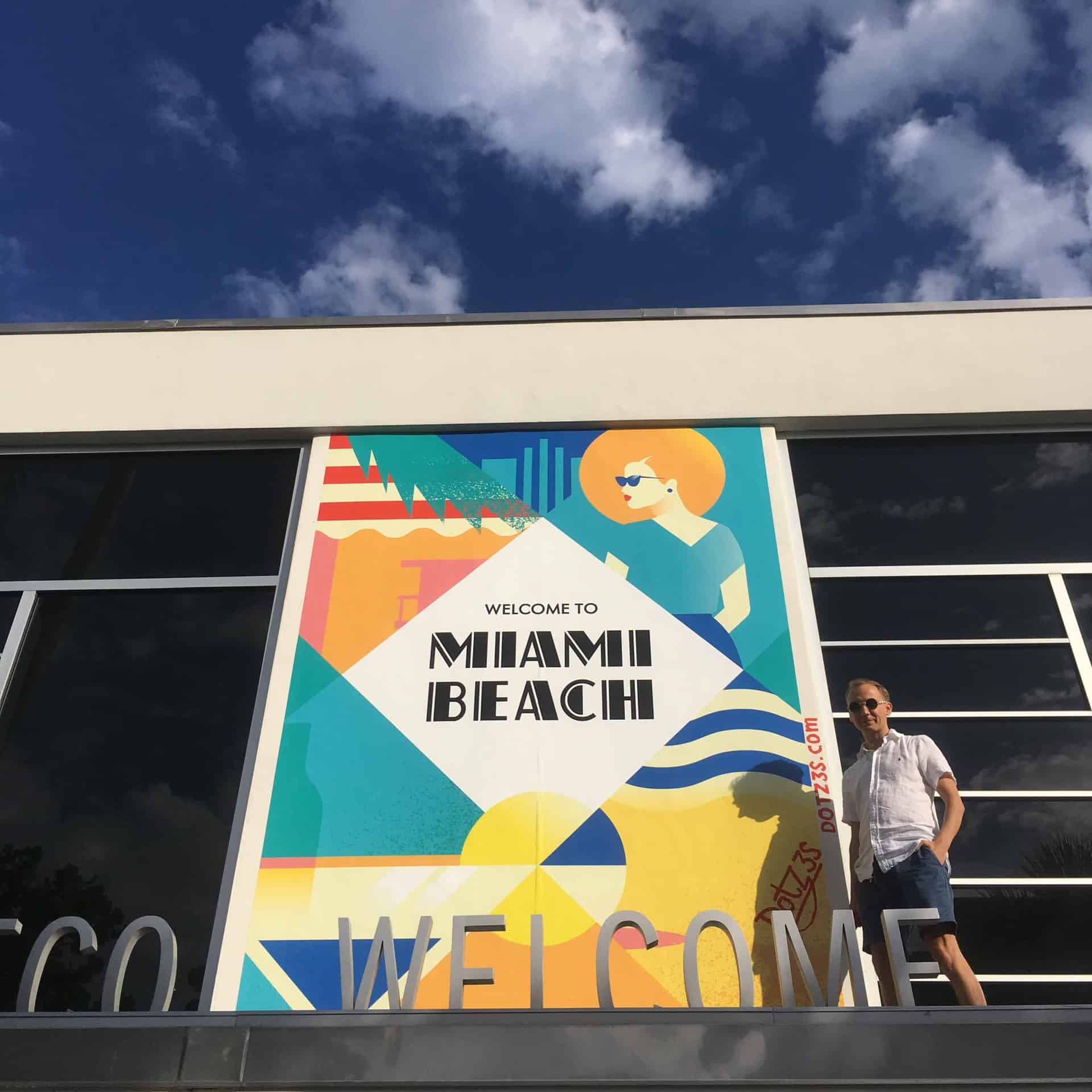 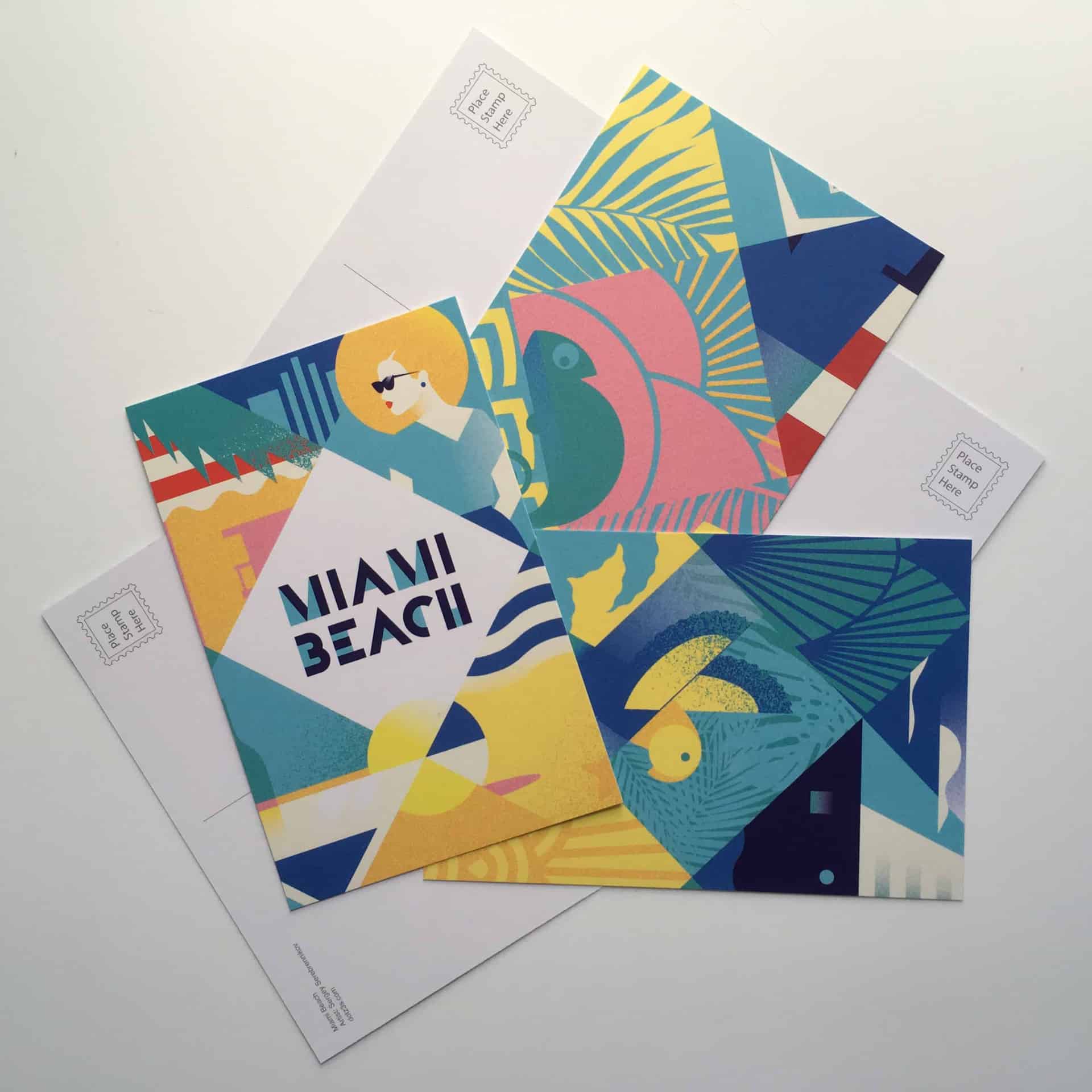 My postcards are on high demand during touristic season and during the annual Art Deco Weekend. I can see people all over the world and their sincere admiration. Such interesting visuals may appear after brave combination of the iconic Art Deco elements with the modern style in the illustration. I learned from this project not to stop trying to find out something new while preparing some artwork.

You can see my other works on Behance (https://www.behance.net/gallery/63221939/Postcards-Miami-Beach) page or any social media.

Sergei Serebrennikov, Miami.
Creative graphic designer and artist, known for its unique work in the style of retro and art Deco. Having extensive experience in advertising, Sergei was digital creates illustrations, posters, etc advertising materials for various companies.
In 2014 Sergei moved to the USA, leaving Russia post of art Director on the TV-channel “Moskva24”, and began work on creative projects.
In 2016, Sergey won the contest of posters for the famous festival “Miami Beach Art Deco Festival”, which takes place on ocean Drive in Miami beach for more than 40 years, and became the official artist of 2016.
Later, he created a series of posters for the wall design Art Deco Welcome Center in Miami beach and a series of works dedicated to famous buildings in Miami beach such as The Bass Museum, Faena Hotel Miami Beach, South Pointe Park and so on. These works were exhibited at his personal exhibition at the Art Deco Museum, 2016 (Miami Beach).
Sergei regularly participates in various festivals, repeatedly included in the short lists of international festivals and exhibitions: shortlist 2015 International Fine Arts Competition by Art Fusion Galleries; Runner-up of open contest «DIGITAL DECADE 2016» (London).
Website

3 comments on “Wellcome to Miami Beach”