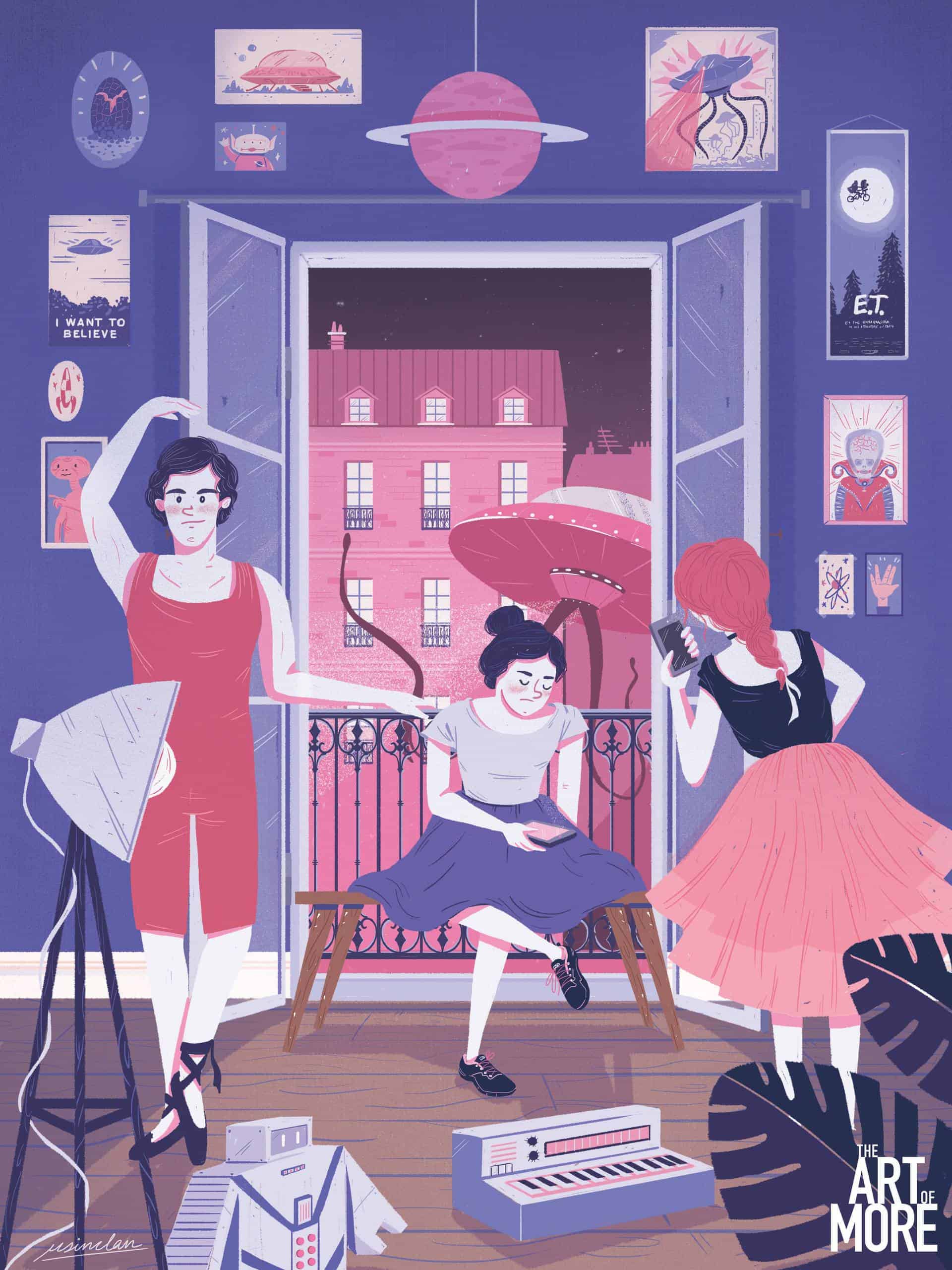 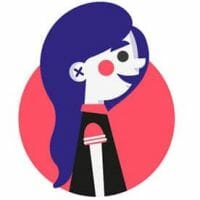 In collaboration with Sony Crackle and other talented members of the The Poster Posse I did an illustration to benefit the Movember Foundation USA that it's taking part of a very special Art Auction.
My illustration "Triple Abduction" was inspired by "Degas' original painting ‘Three Dancers in an Exercise Hall and also by the critically-acclaimed drama "The Art of more". I was asked to make a personal interpretation of the famous artwork where three ballerinas are getting ready for exercising. 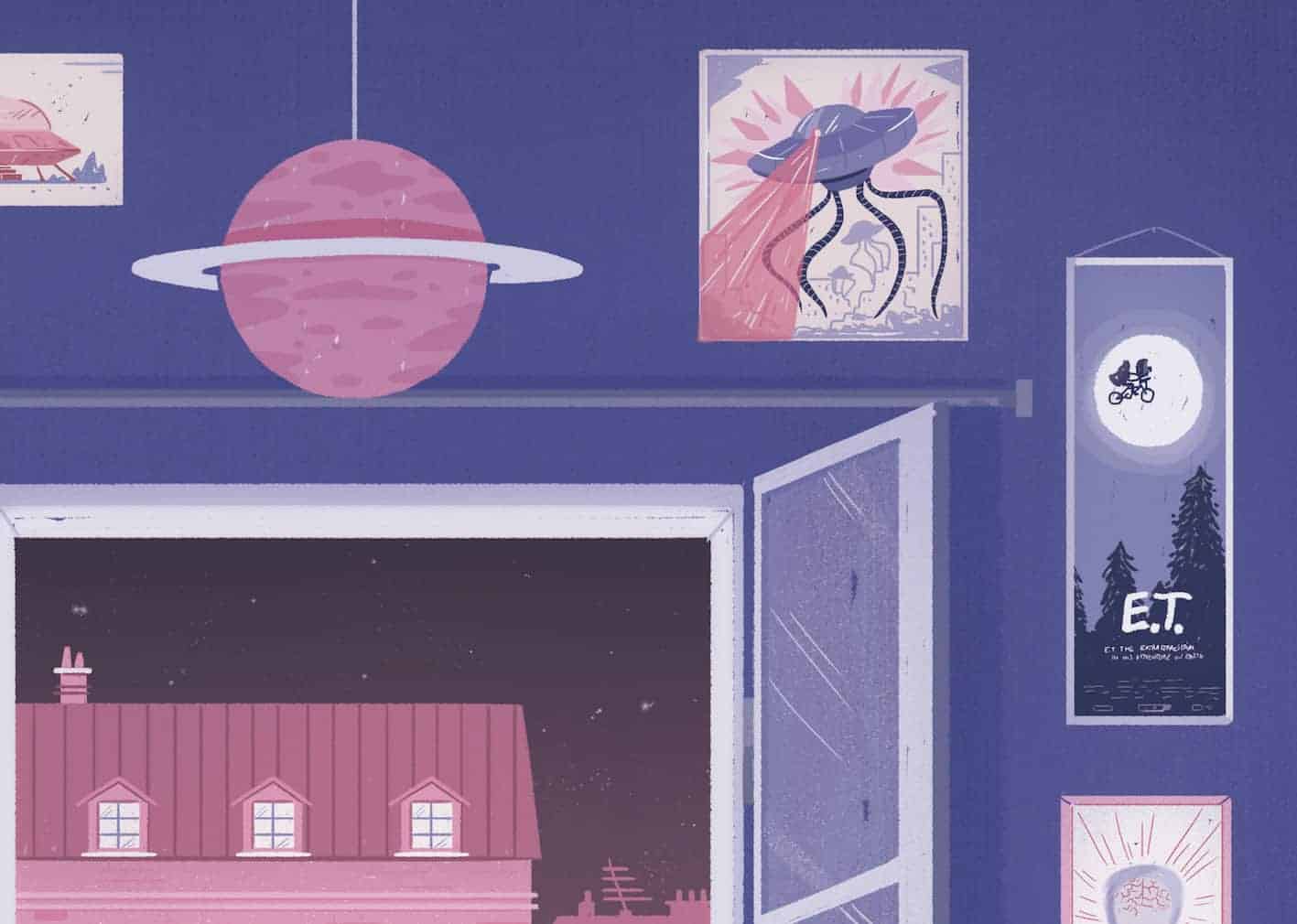 I thought it was interesting to think if this scene could happen in the future. Old painters were all the time recreating reality as it was. My interpretation of Degas' original painting had to still resemble the original one. For this reason I decided to take the same poses of the main characters and also the same setting: a big hall where you can see the rooftops of Paris though a huge open window. So I had to think a bit about the present we're living in and try to imagine our future.
I think we're living in a world that everything has to be fast, we even get impatient if a website is 10 seconds slower than normal. And I've also noticed that the faster we go, the less time we actually have. This is why I feel like it's very unlikely that things that take so much patience and practice as ballet will be still done in the future. Not only because of that, also because of the new technologies and entertaining industries. Seems like we're trapped by the illusion that we're socially connected using social media but the fact is that we're detaching. Human relations are getting colder, that's why I imagined the main girls to be on their phones taking selfies or sending messages than actually helping each other like in the original painting.
Also the future had to have something good, I've also noticed that gender equality is raising, there's still much work to do, but I want to imagine that in the future won't be any differences between men and woman, this is why I drew a guy instead of a girl on the left.
The aliens... well the aliens are there, because of two reasons, first: I think zombie, apocalypses, end of the world kind of movies have been so popular in the last years because people crave meaning. In a world that nothing is relevant anymore and where everyone is so self focused, we could have an apocalypse and no one would notice. The paradox with this is that the world keeps evolving really fast but pop culture seems to be focused on nostalgia: filmmakers keep doing remakes... Strangers things had been the biggest success of Netflix and it's all a 80's movies mashup. I'm wearing old school nikes and listening to Simon&Garfunkel. The world is changing but maybe we're not so ready. Anyway this is only a though inspired by the Degas' painting.

Also this is why the main colors are pink, blue and purple to give it an alien abduction atmosphere. 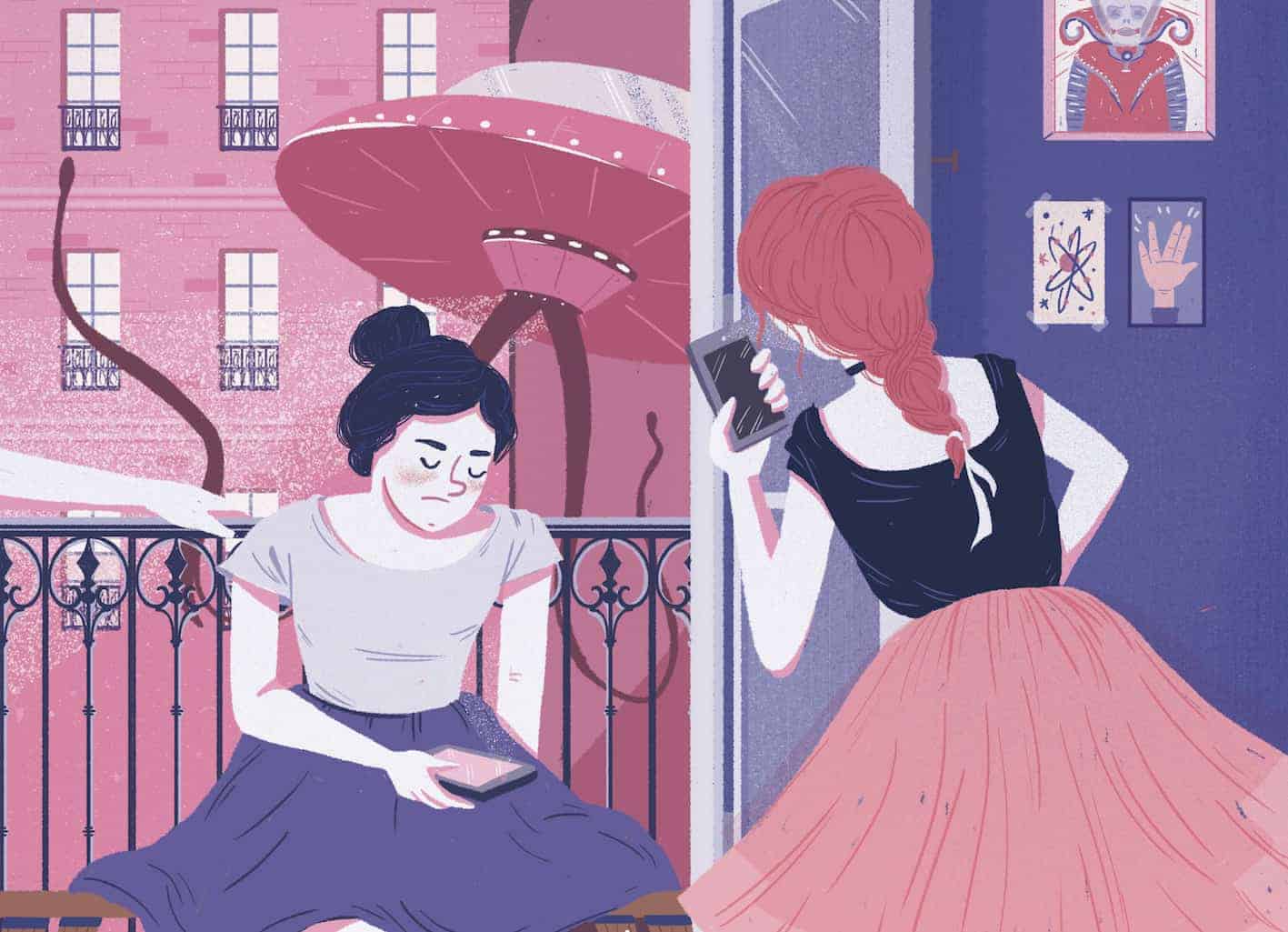 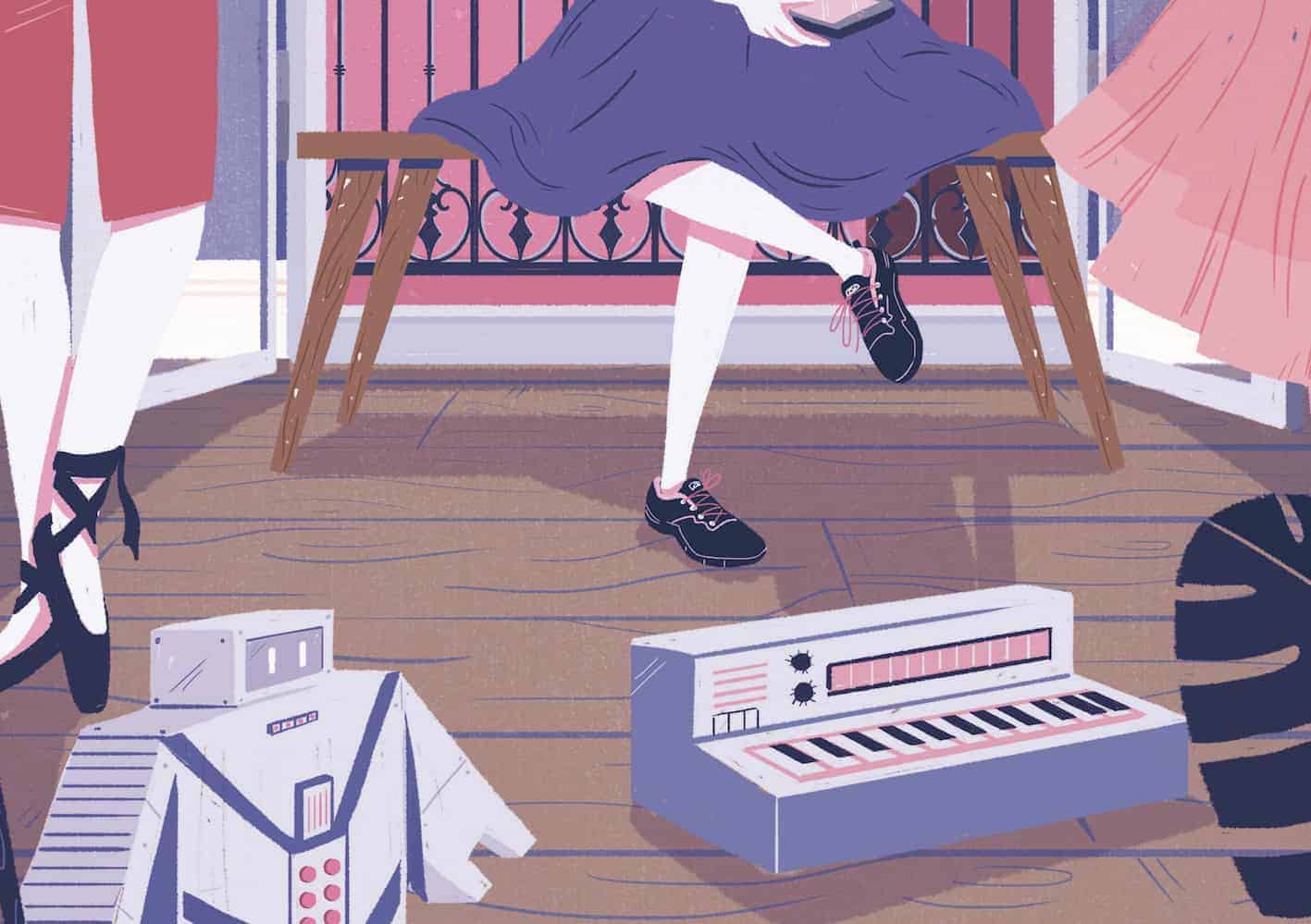 I used a pencil to do the first sketch, I scanned it and then on my computer I used Photoshop to paint the whole image. First doing the big masses of color to figure out lights and shadows and then adding detail and textures with customised brushes. 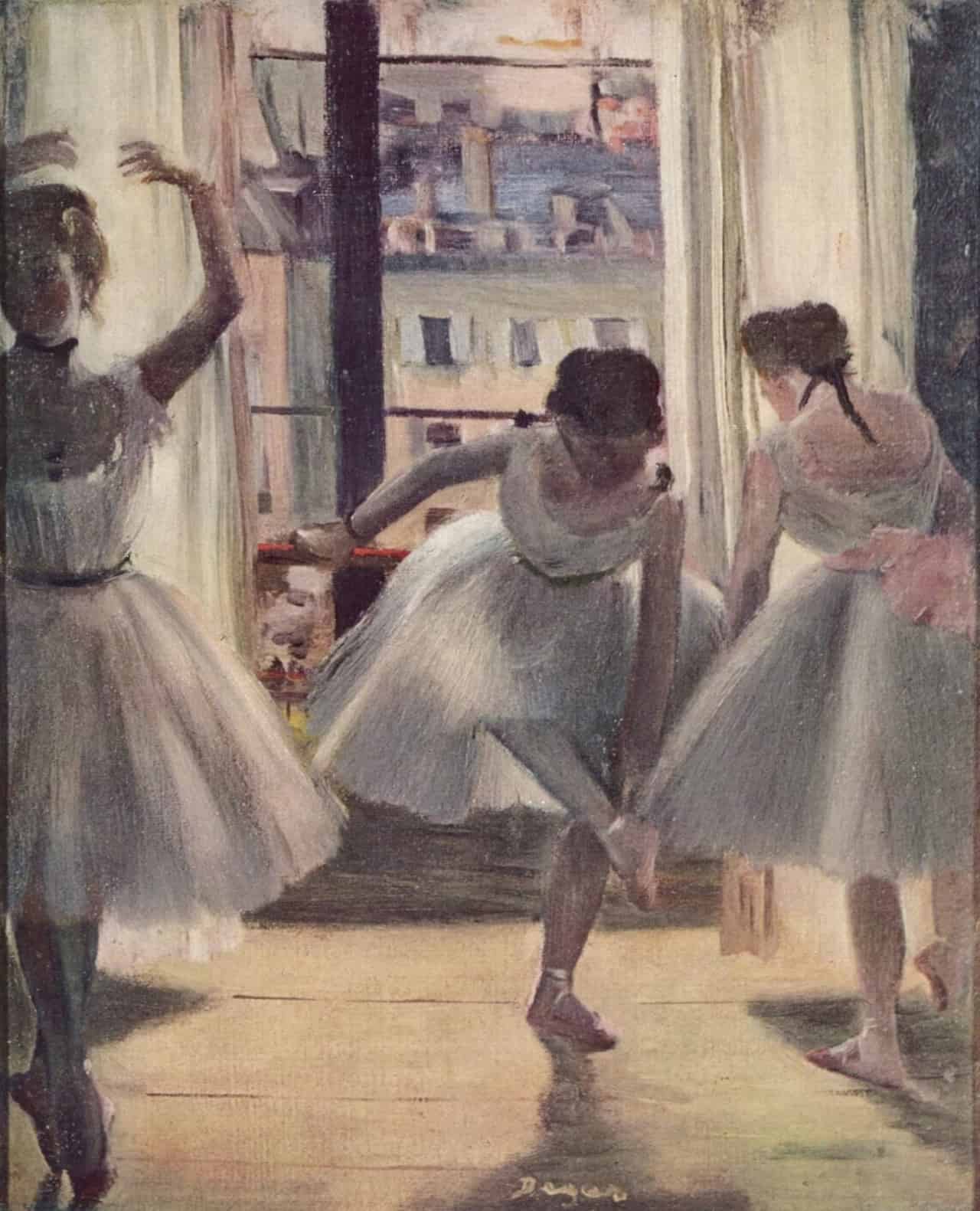 It's only been a couple of days since Sony Crackle posted it for the art auction so I don't know how people are going to respond. For now, I've received positive comments on it. Hopefully people like it and bid for it as it's for a good cause (Movember Foundation).

My name is Maria Suarez-Inclan.
I'm a freelance Illustrator, Art Director and Graphic designer based in Madrid, Spain.

Since I remember I've always been interested in Art and loved drawing.
In 2015 I graduated in Graphic Design at Universidad Complutense.

Besides Illustration and Graphic design, I'm also passionate about Advertising.
While freelancing I've worked as a Creative trainee for Momentum task force (McCann Worldgroup. After that I worked as a Junior Art Director for Saatchi&Saatchi Madrid.
Currently living working as a Graphic Designer in Saatchi&Saatchi London.

A Day at the Park