WEE! is an alternative work desk concept that merges a traditional work desk and a swing into a single piece of furniture. The idea behind the integrated swing seat is that the user can stay relatively active while working and does so in a fun way. What’s more, the seat is not a separate piece of furniture, but rather an actual part of the desk, meaning that it does not take up additional space. The hooks and rope of the swing can be attached under the seat with magnets.

The problem that encouraged me to develop this project is that our daily lives involve a lot of sitting – children do it in schools, adults do it at work and both of them do it at home as well. Studies show that on average, a person usually spends around 10 hours a day sitting. With constant leaps in technology and industry, our life-styles have become less and less physically demanding for our bodies.

Nowadays, most office chairs are ergonomically designed with the goal to provide the maximum amount of comfort, and thus reduce the need to move our bodies at all. However, too much comfort leads to too little movement, which can lead to many health issues like increased blood pressure, neck and back pain, muscle and joint degeneration, ect. Which is why a healthier and more active alternative to sitting should be encouraged.

The inspiration for WEE! came from children’s playgrounds – places that are designed to provide children with fun ways to stay active. It also made me realize of another issue - how growing up into adulthood often makes us abandon our active and childish side the more we age, to the point when even sitting on a swing in a children's playground might be considered immature behavior for a grown person.

When I came up with this project, I wanted to approach the problem with a simple and fun solution. So I took the traditional swing - something that is designed to make us move even when we sit - and applied it to my idea. Result is a workspace that is comfortable enough for a person to use, while at the same provide him with an opportunity and motivation to be a bit more active while sitting. 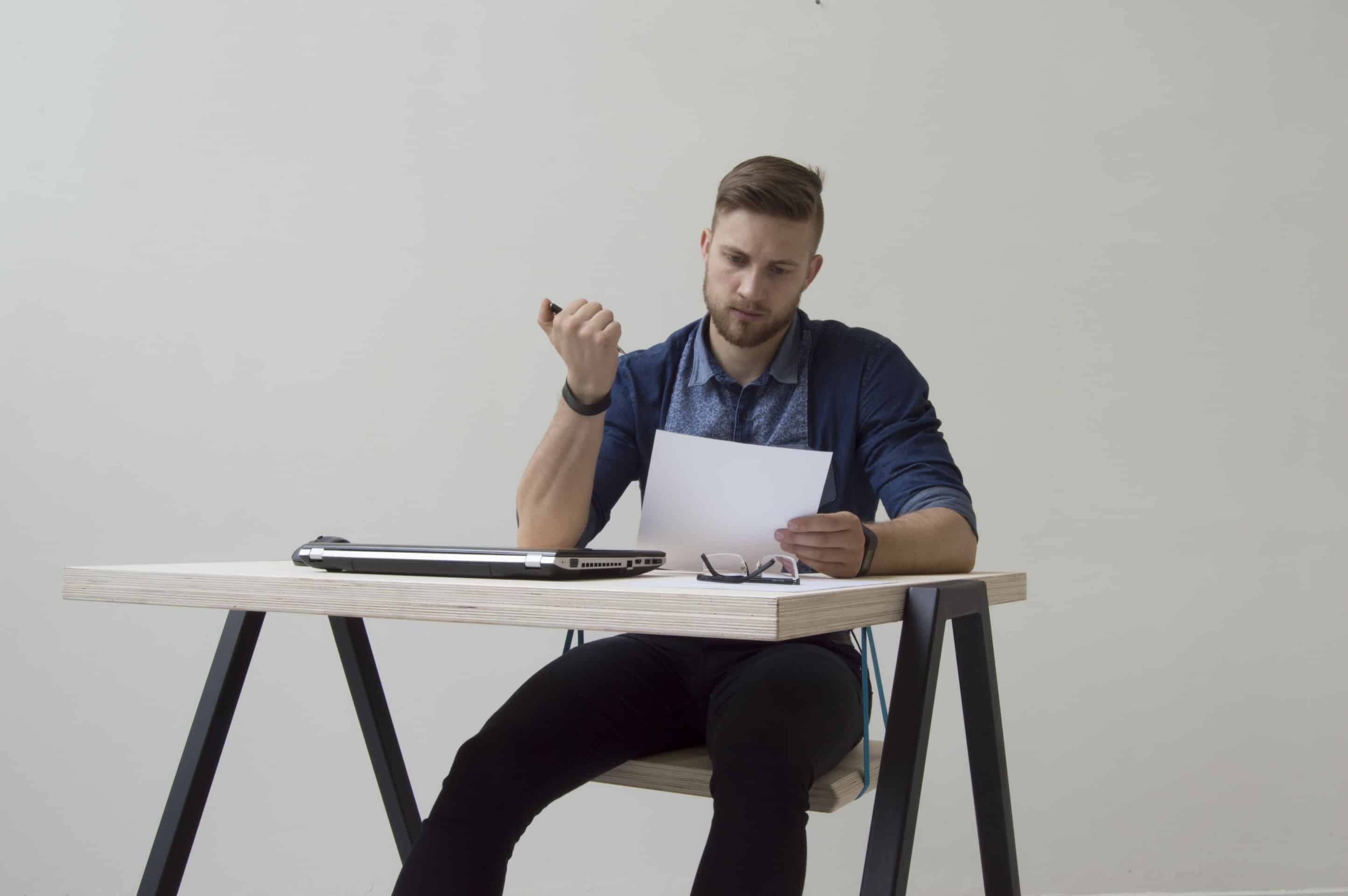 Making this furniture involved a lot of ergonomical testing. At first, I made a 1:1 prototype and I invited my friends and collegues with various heights to try out sitting on the swing and putting their arms on the U shape desk surface. I took their measurements and took notes on their feedback. The next step was focusing on the aesthetic side of the furniture, which involved sketching and 3D modeling. I wanted the table's look to be a mix of scandinavian and industrial furniture design. The V shape of the legs is inspired by children's swings in playgrounds or parks. The surface area of the desk is made from two plywood boards that were cut by CNC, which I then joined together. The metal legs are made from thick steel pipes that were cut and welded together. The legs and the surface are held together by screws to allow the user to assemble or disassemble the desk. 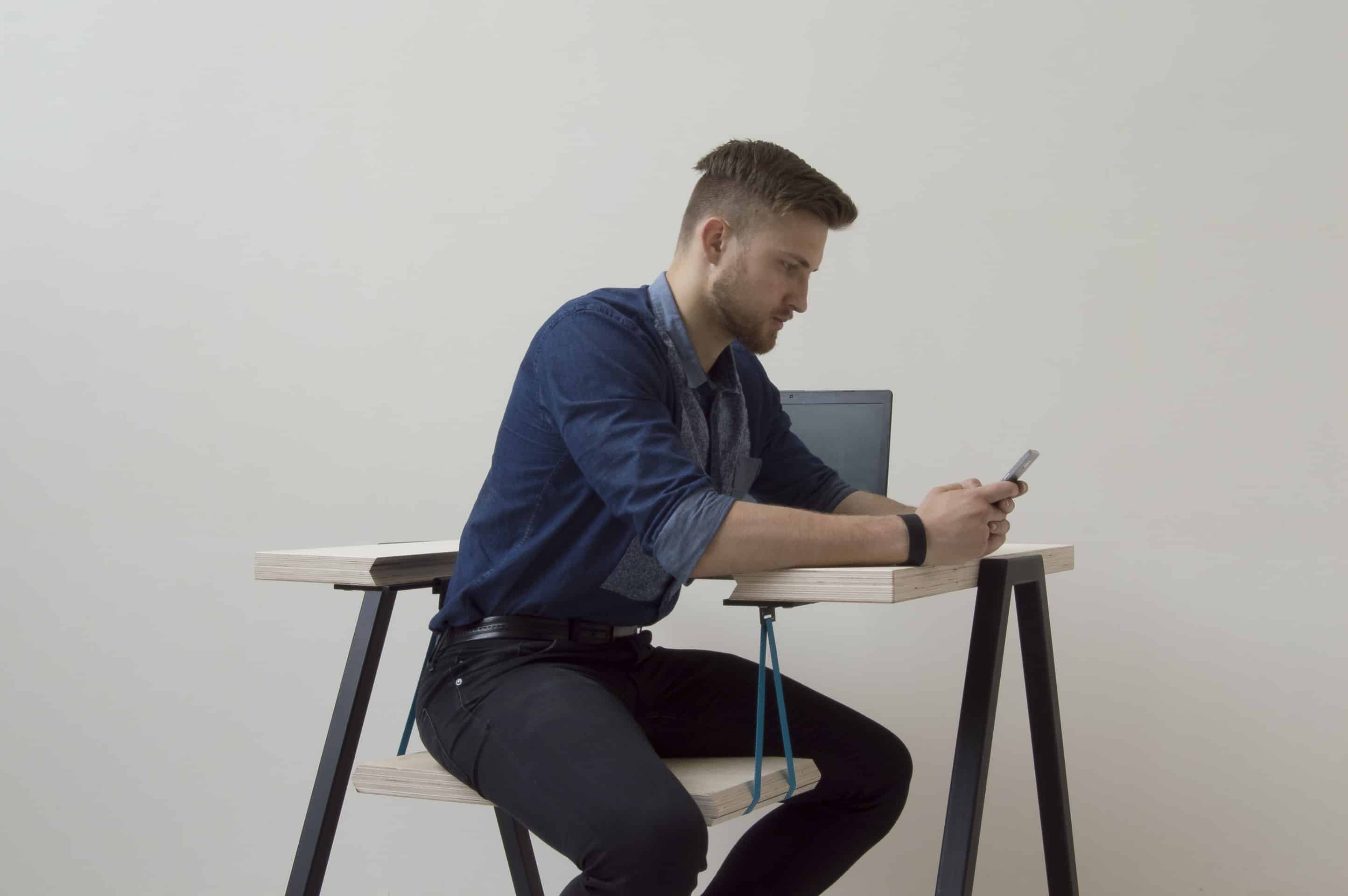 The feedback was mostly positive - everyone liked the playful and inviting look of the furniture. Some people even asked me whether they could buy the prototype or if I intend to further improve my concept. Some people, however showed concern whether there is a possibilty of the table or seat to flip over when someone is sitting on it. As far as I've tested the chances of WEE! flipping over are very slim - and I'm 2 meter tall male who weights a 100 kilograms. As for the seat flipping over, there might be a possibility - but then again the same can be said for regular swings as well.

I am a product and graphic designer. To me, design isn’t just a profession - it’s an understanding of how the world works by analizing the small details in our everyday life and asking the question “How can I make it better?”, as well as distinguishing the wants from the needs, and making a product that would have purpose. My passion for my work often out-weights my needs like sleep or food, which I guess is one way to say that I love doing what I do.
Website
Sponsored
3D Interior Architecture with Unreal Engine 4